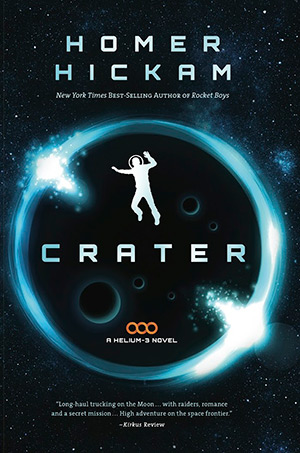 Most space enthusiasts know Homer Hickam as the guy who wrote Rocket Boys that was made into the popular movie October Sky. Hickam realized his dream of being a NASA engineer after working as a coal miner and serving in Vietnam. With that background, he is perhaps one of the most qualified people on Earth to write a story about a young man with a sharp engineering mind working as a miner in the harsh lunar environment with conflicts that include the latest military weaponry.

Crater Trueblood is a 16-year-old orphan who loves his life and job as a miner in a small town on the Moon about a hundred years in the future. Earth has been ravaged by war and desperately needs lunar Helium 3 as a fuel to power their nuclear reactors. (Helium 3 is extremely rare on Earth and is expected to be relatively abundant on the Moon.) Crater’s quick thinking during an emergency brings him to the attention of Colonel Medaris who owns the mining company where Crater works. Medaris recruits Crater for a special mission: to pick up a mysterious package for the Colonel that has already cost two men their lives.

To get to the spaceport some thousand miles away without Medaris’s enemies suspecting his true mission, Crater joins a convoy of truckers transporting Helium 3 to the other side of the Moon. He and Medaris’s headstrong and attractive granddaughter, Maria, will serve as the convoy’s scouts. Their job is to find the best route that avoids steep craters, sharp boulders, and bandits who will exact fees, take hostages for ransom, or kill them and take their equipment. Crater’s best friend Petro, a typical overly self-confident teenager, does not want to be left behind—especially after he meets the gorgeous and well-connected Maria. He signs up as a driver for the convoy and becomes a thorn in Crater’s side.

Another key character is a personal AI that can shape change. Although considered illegal tech on Earth, Crater is allowed to keep this “Gillie” because it is the only thing that his parents left to him (they died in a crash just after their arrival on the Moon). Gillie provides comic relief as well as a bit of mystery as to his true nature and capabilities.

The details of the lunar mining operation, working in the dangerous lunar vacuum, and the politics of a future world dominated by who controls the source of electrical power, are done well enough to satisfy even the most nitpicky of space buffs. The descriptions of the setting and explanations about how things work are in themselves reasons to read the book (in my opinion), but some young readers used to fast action may find the story moves too slowly as a result. However, kids with engineering minds are going to love all this detail and maybe start planning how to make it real.

Though the author put a lot of great engineering into this book, I did uncover one science error. On their trek across the Moon, Petro leans against a boulder. “As he did, the Earth began to peek out from the horizon” (p. 29). Because the Moon always keeps one face toward the Earth (plus or minus about 5 degrees), the Earth as seen from the surface of the Moon does not rise and set (though it goes through monthly phases). The sun rises every 2 weeks and sets about 2 weeks later. Future residents of the Moon can thus use the Earth’s position (and phase) to determine their location on the Moon.

I thoroughly enjoyed being immersed in this future lunar society complete with lots of colorful “characters” that are not at all like the former military astronauts and somewhat stuffy academics that are often portrayed as populating early lunar settlements. The people who live in Hickam’s Helium 3 universe are more like the folks you expect to meet in his home town of Coalwood, West Virginia. I suspect that young people reading this book will feel right at home on the space frontier.

Crater is the first book in the Helium 3 series. It was followed by Crescent (released May 2013) and Crater Trueblood and the Lunar Rescue Company (released June 2014).