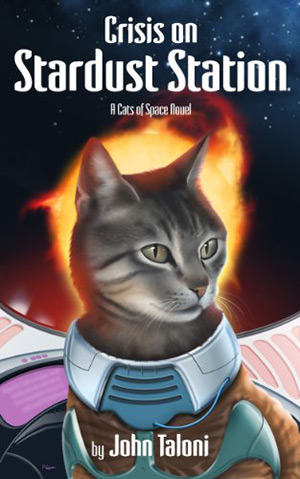 This book is science fiction taking place in the relatively near future when over half of Earth’s power is provided by a network of space-based solar power satellites, combined with pure fantasy involving intelligent telepathic cats. The science fiction aspect is relevant to NSS goals, and the fantasy aspect is entertaining and a plus for cat lovers. The book seems to be intended primarily for a young adult audience.

John Aldrin is one of three astronauts on the Stardust Space Station who are tasked with maintaining the power satellites. Although the space station has manufacturing capability, supplies from Earth for fuel and parts are always in short supply, and resources must last six months until the next crew rotation from Earth. John’s tasks include monitoring the satellites and embarking on short hops in a small spacecraft to repair any malfunctions. It seems that the space station at an earlier time had a larger population, including children and animals, and contains some large living spaces such as a huge forest module.

John has a pet cat named Pumpkin (whose actual ‘Kittyspeak’ name is Mrrowl). Unbeknownst to John and the rest of the astronauts, the cats of Stardust Station are intelligent, telepathic, and have their own hidden societies. There are tame cats that live with humans (whom the cats call ‘Highwalkers’) and wild cats that live in the forest module. The tame cats periodically visit the forest module to hunt mice, and although there is friction with the wild cats, they have all agreed for generations to keep their abilities secret from the humans.

John has Mrrowl with him during one typical day’s work of satellite repair when a giant solar flare hits, causing electrical arcs on the satellites and power to fail on the space station. When John and the other astronauts become incapacitated, Mrrowl must take control of the shuttle ship, shut down the satellites, and navigate back to the station, thus giving away the long held secret of the cats.

No sooner has the shock of this revelation worn off between the humans and the cats, when a new threat looms. Even larger solar flares are predicted, which will permanently destroy the satellites and the station, as well as all unprotected equipment on Earth. As Mrrowl tries to convince the cat societies to work with the humans, John must convince the multiple Presidents of Earth that the humans and cats can restore power and protect the Earth. But this can only be done if the Presidents would divert scarce resources to the station via mass driver launches.

At this point I found that I had to suspend my disbelief (once again!), as it seemed unlikely that a couple of humans could take raw materials and manufacture cat-friendly space suits, tools, and space ships, and then deploy a space shield all within a few days before the flares hit. But it does have the advantage of keeping the action moving quickly. Although the novel does come to a conclusion, it leaves open the question of some other intelligence that is monitoring the situation, leaving room for a sequel.

Young adults and cat lovers should enjoy the cats’ interactions as well as reading about everyday life working in space. In addition, the novel highlights the importance of space based solar power and the ingenuity that may be needed by future astronauts who will make space their home.