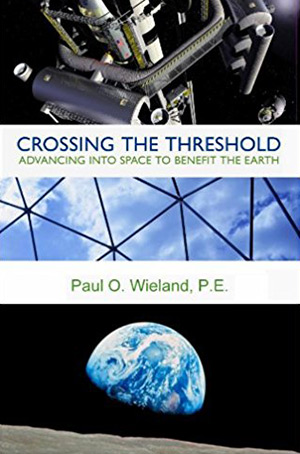 Crossing the Threshold: Advancing into Space to Benefit the Earth is exactly the sort of book the space movement needs more of. Incorporating personal experience with life support systems and a personal passion for environmental stewardship, this book is one man’s answer to the question that bedevils NASA year after year: “Why should human beings go into space?”

First, a little background and disclosure. Wieland is a member of the Huntsville Alabama L5 Society (HAL5) and was the chair for the authors track at the 2011 International Space Development Conference, where I served as conference chair. Like most things he attempts, Paul handled the track professionally with a minimum of fuss. His background, covered in the first part of the book, has been in developing life support systems for NASA Marshall Space Flight Center. He also makes and teaches pottery, paints, and from what I’ve heard does a fair job at swing dancing. So when a multitalented person like this decides to write a book, you know he’s going to incorporate knowledge from many different fields. (He was apparently successful because the book earned a gold medal for science books from the Independent Publisher Book Awards in May 2011.)

Wieland starts his work with a discussion of energy and environmental problems that have plagued civilization over the last 50 years. He uses these problems as a starting point for his argument for sustainability — on Earth and in space. From there, he structures his vision as follows: Part I, Thresholds, describes moments in U.S. history that enabled rapid expansions of progress, specifically in the Old West and in the field of commercial aviation. Part II, Envisioning the Future, takes the first steps toward describing how space activities could help bring progress. Part III, The Way to the Future, discusses the various technologies being developed today to make space happen, from Virgin Galactic’s SpaceShipTwo to more far-out concepts like the space elevator. Part IV, Creating the Future Now, points to the long-term prospects space can provide to make life better on Earth. Part V, Roles for All, lays out the roles government, industry, and private individuals can play in making a spacefaring future.

What I like best about this book is that it has a consistent theme. Wieland seems to understand the absolute need to tie space endeavors to current problems, like improving or sustaining the environment. He is not anti-technology, being a strong advocate of grand projects like the space elevator, but he also is quick to point out the downsides of any technology. (One reason he’s such a fan of the space elevator, I believe, is because a large number of space launches would create a lot more contrails and other atmospheric effects that could be harmful.) In this approach, Crossing the Threshold is a bit like Paradise Regained by Les Johnson. Both Wieland and Johnson recognize the harmful environmental effects of current petroleum-based technologies, see that the list of Earth-based “green” alternatives are not sufficient to sustain civilization, and advocate for more work on space-based energy, specifically space-based solar power. If Wieland’s book has any downsides, they might be simply trying to cram too many ideas into less than 200 pages (the notes and index run 74 pages) and perhaps providing a bit too much on his personal story, fascinating as it is.

One useful aspect of this book is that it lays out a set of concrete actions to include in a pro-space agenda, from specific government programs to laws that need to be developed to expand opportunities on the space frontier. The problem with such topical books is that they can become dated quickly. Right now the biggest concerns in this country are economic. Finding funding for a guaranteed set of government launches or investments in particular types of technology might fall on deaf ears in a year where NASA will be lucky to keep its budget flat. Still, the oil spill in the Gulf of Mexico in 2010 might make the public more supportive of a space-based project if its ultimate goals include energy independence or “clean” energy.

In the long term, space advocates will get their wish for a broad base of support for large-scale projects when they tie into Earth-based concerns. This is a reality Wieland seems to recognize. He sees opportunities, technological progress, and environmental protection as good long-term, Earth-based hooks for capturing the public imagination. He is, like many of the folks who come to NASA, a dreamer who wants to see his dreams become reality. The trick, as always, is giving the non-space-interested public a good answer — or answers — to the question, “Why should I care?” Wieland takes a good shot at providing those answers.