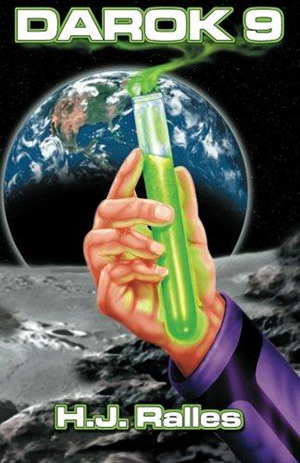 In a future where the human survivors of a devastated Earth live in “Daroks” on the Moon, a scientist who holds the key to survival depends on his young nephew to hide his secrets from the enemy.

I was introduced to Hilary Ralles by the International Space Development Conference (ISDC) 2007 co-chair Ken Murphy, who came across her work via a book signing in Dallas where they both live. We quickly recruited her to participate in the NSS Reading Space book sale at the ISDC in Dallas, where I picked up a copy of Darok 9.

Darok 9 by H. J. Ralles focuses on a young scientist named Hank who has developed a substance called SH33 that supposedly allows humans to internally recycle their own water. Because water to support the lunar communities, called Daroks, must be imported at great expense from Earth, water is always in short supply. The water supply is also at risk because of attacks by a government called Fourth Quadrant, one of four “political” quadrants into which the territory of the Moon has been divided.

The book opens with an attack on the research lab where Hank is secretly developing the SH33. He takes his research notes on computer disks and all of the existing test tubes of the substance with him. He arrives at his apartment in Darok 9 to discover it is being ransacked. Afraid that the secret nature of his project has been compromised, he enlists his sister to hide several of the test tubes, and has his nephew, Will, copy the disks. He then reports to the general in charge of his project, only to discover the man has been killed, and he is being framed for the murder. Hank is held hostage by the murderers who threaten his nephew’s life unless he hands over all copies of his notes and tubes of SH33. But thanks to Will and his mother’s resourcefulness, their threat is not so easily accomplished.

The idea that a substance could allow a person to live without water is pretty hard to swallow (sorry, couldn’t resist!). But fantastic “what ifs” are a staple of science fiction. The author wisely does not attempt to explain how this substance works, just uses it like impossible warp drives to tell a tale of people doing what they have to do to survive in a harsh world. And who knows, perhaps one of the children reading this book will be inspired to one day invent something to reduce our need for water (and warp drive, too!).

Educators will appreciate the way the author wove the “scientific method” and “the ethics of science” topics into the plot. The issue of drug testing, animal trials, and the use of controls are all covered as Hank struggles to find a way to avoid putting his nephew at risk. He and his family must also put themselves at risk to guard the greater good of society, realizing that even medical research designed to save lives can be used as a weapon in the wrong hands.

In terms of human space settlement, the book clearly shows that the Moon offers humanity a “fall back” position if the Earth ever becomes uninhabitable because of war, extreme pollution, or a cosmic calamity. (In the book, the reason is a worldwide nuclear exchange.) This is an important idea to introduce to children. The author includes mention of how the colonists have gotten along using oxygen and metals from the lunar regolith. We get glimpses of a possible lunar life in descriptions of Will’s one-day-a-week school, Hank’s use of an underground bullet train, and his sister’s trip to the hospital where she works.

The straightforward chronological plot, the somewhat stereotypical characters, and the uncomplicated language should make this story easy to follow by upper elementary students. The violence is all “off stage” and there is no sexual content to distract young readers from the action.