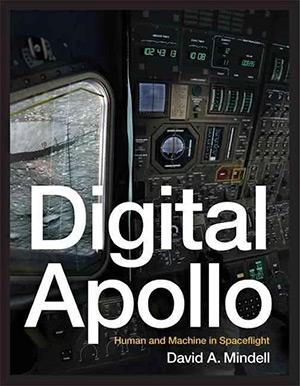 One would hardly expect a book that sought to define the complexities of the man/machine interface of the Apollo spacecraft and Lunar Module would include such personalities as Orville and Wilbur Wright, Jimmy Doolittle, and Charles Lindbergh. Nevertheless, these and many other pre-computer flyers and researchers have been woven into this book by the author, who has a remarkable grasp of aerospace and computer science.

David Mindell is Dibner Professor of the History of Engineering and Manufacturing, Professor of Aeronautics and Astronautics, and Director of the Program in Science, Technology and Society at MIT. He has achieved a commendable work in this text by establishing and clarifying the role and responsibilities of man and machine over the past 100 years—primarily as it relates to aviation and space endeavors.

There was a contentious debate on how much each participant (man and machine) could or should play in the first lunar landing expedition. However, the implications go far beyond that aspect. Even the rather simplistic flight operations in contemporary light aircraft are now facing the problems of division of responsibility with automation in the cockpit.

While several paths are explored to highlight this multifaceted problem, the author does an excellent job of moving the reader through the development of gyroscopic flight instruments and electronic navigation systems that ultimately led to the aircraft autopilot. This robotic function was the first obvious challenge to the pilot’s control authority. It sought to assume some of the responsibility as the speed at which events transpired increased dramatically with the advent of jet propulsion. Mindell uses the development of rocket powered research aircraft of the 1950s (as exemplified by the X-15) to take the reader step-by-step into the inability of the human senses and judgment to respond with appropriate physical reactive processes. A good description is provided for the stability and control aspects of an aircraft which is then transferred to the needs of the spacecraft.

Perhaps more profound are the social implications of the pilot-in-command concept built on the legendary model of “the right stuff” that is threatened by automation. The antagonistic nature of the issue surfaced with the sudden advent of the space age at the end of the 1950s and the prospect of man-into-space. The two diverse spacecraft design philosophies of man as a relatively passive passenger or as a proactive pilot were hotly debated during the Mercury Program—the first American manned spacecraft. Early astronaut candidates had to overcome the derisive spam-in-a-can comments by their peers and even their own self-doubts as to how much they would get to “fly” the spacecraft. The author uses the terms chauffeur and airman to highlight the possible human roles.

At this point the author moves to introduce the fundamental aspects of guidance and control and the pros and cons of the digital verses analog computer. He explores the early methods of programming and advent of the word “software.” With regards to the actual programming, technically it was a form of core rope storage with inhibit and sense lines (firmware). As this reviewer was an active user in the formative stages of this type of computer software in the mid-1960s, I appreciated the way Mindell describes the technical pathways and hardware dependence of the times.

The multiple issues converge in the trilogy of the role of the crew, mission controllers, and spacecraft systems. The author takes the reader just far enough into some of the technologies and sociological dead-ends to validate why certain functions and philosophies were discarded during the engineering of the Apollo systems.

All of of the Apollo flights are examined to illustrate how the final product performed during the lunar landing. With each mission, the actions and observations of the crew—as well as the sometimes misleading reports of the media—created erroneous impressions among the public as to the effectiveness of man over the machine. There are subtle indications that the author may be slightly biased in favor of the machine.

Some readers may be surprised to learn the Lunar Module (LM)—being fly-by-wire—used the pilot’s inputs to the onboard control system to generate the desired pitch attitude and vertical speed during the lunar landings, which the computer then maintained. To achieve the desired level of interaction, a simple and flexible interface to a series of programs was developed. Each program guided the LM through a specific part of the descent. Although the landings were described as being “manually controlled” they were, in fact, flown by the computer. The astronauts did not appreciate being at the mercy of a computer for their survival.

Many of today’s military and some civil aircraft are fly-by-wire. In numerous instances, the man and the machine disagreed over what function to perform at a given point in time, with disastrous consequences.

It was noted that, following President Kennedy’s 1961 commitment to go to the Moon, the first contract was awarded to MIT for the guidance and control computer functions of the spacecraft. Of course, this is the premise of the book, that MIT played a critical part in the lunar program.

It is hard to find any misstatement of fact, but one that should be noted is that it was President Eisenhower who dictated that military pilots should be used in the initial manned flights, not Lyndon Johnson (p13).

That the Apollo program succeeded in meeting many challenges despite an unrealistic deadline of landing a man on the Moon before the end of the decade, politics, bureaucracy, mismanagement, and technical problems, is a testament to the motivation and integrity of so many of the participants.

This will not be an easy read for those not well schooled in aerospace and computer science. Although a bit dry at times, the book is an excellent history of the topic. If I have any criticism, it is that the title does little to portray the content and motivate a prospective reader. Despite the highly technical nature of the topic, Mindell effectively incorporates a multitude of personalities that keeps the text human.