Book Review: Dragonfly, NASA and the Crisis Aboard Mir 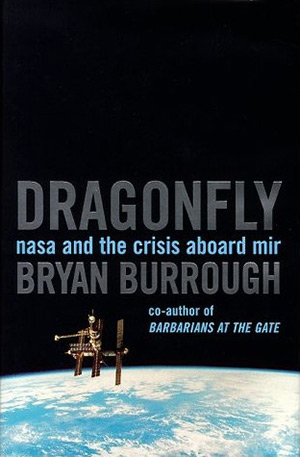 Dragonfly is the gripping story of seven American astronauts and their missions to the dangerously decaying Mir space station from March 1995 to June 1998.

For those who have overlooked this book in the past, do not be discouraged by the length of the book or the title — which was inspired by the appearance made by the solar panels on Mir. Bryan Burrough takes us to Star City then to Mir and back, almost as witnesses of the crisis aboard the Russian space station. If you wish to fly in space yourself or just want to better understand this period of space history in far greater detail than the nightly news reported at the time, Dragonfly is a must-read.

NASA’s new administrator Dan Goldin traveled to Moscow to negotiate the deal for what would be called the phase one program. The huge, now private, Russian space contractor Energia wanted nothing to do with an astronaut- cosmonaut exchange without huge cash payments. First Goldin forced Energia to recognize the fledgling Russian space agency before agreeing to an exchange of an astronaut flying on Mir and two cosmonauts aboard the space shuttle along with $400 million from NASA.

The reader finds out quickly why the author describes “The dirty little secret of the Mir program is that virtually none of the astronauts want anything to do with it.” We are brought along to Star City and the remote Gagarin Cosmonaut Training Center to bear direct witness to the deterioration of the Russian space program. The Energia heavy-lift rocket
and Buran shuttle sit moth-balled — all that is left is Mir.

Energia built and maintained Mir and, after turning to a private company, was often accused of putting profits ahead of safety. The writer vividly describes the configuration, condition and environment on Mir. The hatchways are crammed with cables and vent tubes which in an emergency could be a great problem in closing off a section. When this was discussed “the Russian’s listened but did what they usually did when the Americans brought up safety concerns, which was to ignore them.”

Through Burrough’s research and prose, we can understand the disorganization and chaos of John Blaha’s training and mission aboard Mir. The author covers the career of his replacement, Jerry Linenger, and the irritation of other astronauts and the Russians with his “perfectionism” and his “willful ways.” He then delves deeply into the selection, training, mission events, experiences, opinions and perceptions of Linenger. His personality could be polarizing to his colleagues and crewmates, and he was present for some of the most dangerous and traumatic events to occur on Mir.

As Aleksandr Lazutkin changes a lithium perchlorate cassette, the solid fuel oxygen generator (SFOG) catches fire. It is soon an oxygen-fueled blowtorch belching thick black smoke. Commander Korzun empties three fire extinguishers to put the fire out as the crew is forced into oxygen masks to avoid being overcome by unknown toxic smoke. Unbelievably, the Russians did not tell any NASA representatives about the fire until twelve hours after it occurred, and then downplayed safety concerns. Only weeks after the dramatic fire, Vasily Tsibliyev is ordered to perform a manual docking test. As equipment fails, Linenger is sent scrambling for the Soyuz craft as the Progress supply ship narrowly misses hitting the station. Communication problems and coolant leaks plague the space station and the Russians want Linenger to be assigned to help maintain it. In his view of responsibly representing the American people, Linenger felt that Tsibliyev and Lazutkin did not manage their time well, and the United States didn’t pay $400 million to abandon the experiments and fix Mir.

Once again at Star City, Burrough chronicles the astronaut’s inadequate training, their interpersonal relationships, and the relative flow of vodka. From Norm Thagard’s refusal to translate Russian training manuals for Bonnie Dunbar after a disagreement and shouting match, to John Blaha never wanting to speak with Shannon Lucid again after he perceived that she had abandoned him. The author helps us understand the Russian culture and attitude where the vendor or supplier calls the shots. It could be “glimpsed every morning in Russian grocery stores, where butchers would tell women what steaks they could buy.” In the space program, Energia’s basic attitude was thanks for the $400 million — now we will tell you what experiments and other activities you can do on Mir.

Returning to orbit on Mir, the reader finds Jerry Linenger’s replacement, Mike Foale. During training Foale immersed himself in the Russian language and culture as he was determined to become part of the crew, although he detested the Russian attitude and culture of the male-dominated power and control of society. He thought that NASA’s idea of a cooperative International Space Station with the Russian’s in an “entrepreneurial and responsive” way was “hopelessly naive.” “The Russian’s are never going to do that,” he says. “They are total masters, in maneuvering, in bargaining. All they want is to be masters. It’s almost a game to them.”

Foale would experience one of the most dangerous events that can happen in spaceflight. The Russian’s again try a test of the Toru manual docking system for the Progress supply ship, which resulted in the near-miss on Linenger’s flight. This time, Tsibliyev is unable to brake the Progress, and it hits the American science module Spektr. As the station begins to decompress, Foale heads for the Soyuz to prepare for evacuation. After several minutes he realizes that his crewmates are trying to seal off the leak. Eventually they would succeed but not before losing all station power and control and entering free drift. Power would only be regained after Foale was able to direct the use of Soyuz to reorient the station and its solar panels with virtually no help from the ground. Foale would say later that he did not think the Russians would evacuate Mir under any circumstance, to the point of going down with the ship.

In a swift report of the accident, the Russians would place all the blame on the station commander Tsibliyev. Only after Tom Stafford and Joe Engle were sent to Russia would they brow beat them into admitting that the collision was not Tsibliyev’s fault. Lack of training and equipment failures were to blame.

There were training snafus, communication problems, a fire, a near-miss, the collision and repeated power and control losses of the station. Finally, a cursory safety review of Mir and the phase one program was ordered. In the end, Dan Goldin would rule that the space station was safe enough. The last two American astronauts flew to Mir to finish the phase one program and experienced many of the same frustrations and dangers as the others.

Even for the non-space enthusiast, this book is a great human and international drama. For those of us who hope that we will be able to travel to space soon, we are treated to a great ride. Through Burrough’s extensive research and travels, the reader can follow the astronauts training at Star City, entering many off limit areas. We are able to glimpse the NASA culture as well as the attitudes and behavior of those in the Russian space program. For many of us, the best of this book is the experience and understanding we are given of life aboard Mir. Through the words of the cosmonauts and astronauts who worked and lived there, we can feel like we have spent time aboard the aged space station.

Dragonfly is a comprehensive telling of the politics, personalities, cultures and equipment that were America ’s experience with the Mir space station. In the end, Bryan Burrough sums up the phase one program well with a quote from the well-known and respected NASA veteran Gene Kranz. “We’ve got two different sets of standards we use, those (for) working with the Russians and those we follow in the U.S. If we had these mistakes [in the United States ], there would be a detailed investigation all through the chain of command. That didn’t happen here.”

For anyone who believes that an international cooperative space program is the one and only way humans can have a space station, colonize the Moon, or venture to Mars, Dragonfly should be required reading.