Book Review: Dreams of Other Worlds: The Amazing Story of Unmanned Space Exploration 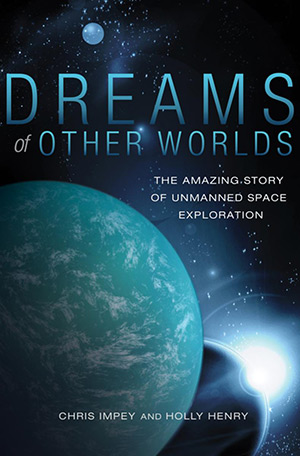 Coverage of space exploration has always focused on missions starring human participants: Gemini, Apollo, Skylab, the International Space Station. Manned missions may get most of the glory, but most of the science comes from the efforts of tireless and sometimes trouble-plagued rovers, satellites, and probes. Chris Impey, a university distinguished professor and deputy head of the University of Arizona’s department of astronomy, teams up with author Holly Henry to tell the tale of 12 missions that have expanded our view “from comets to cosmology, from the Mars rover to the multiverse” over the last 40 years.

The authors begin by pointing out the many advantages of robotic exploration over manned missions. Probes and satellites don’t need to sleep or carry food and water; solar power or radioisotopes provide reliable, relatively lightweight sustenance. Their sensors can span the electromagnetic spectrum, from far infrared to high-energy gamma. On-board cameras, robot “hands” and labs allow robot explorers to record weather data and even collect and analyze samples of soil and atmospheric gases. Best of all, with thoughtful design and construction, a space probe or rover can keep working for years, even decades, allowing researchers to extend their reach and add new missions when a probe’s original work is completed.

Impey and Henry begin their tour with NASA’s efforts to pierce “the mystique of Mars,” a planet that has gripped human imagination for over a century. Mariner 4, one of several probes built to explore the inner Solar System, swooped within 10,000 kilometers of Mars in 1965 and sent back the first detailed black-and-white images of the planet’s surface. Scientists saw a barren, cratered plain not unlike the Moon. When Viking I, the most complex probe ever designed, landed on Mars in 1976 and delivered color photos of a red, rocky plain against a dusty horizon, the world—and all its scientists—were mesmerized. Viking not only revealed geological details and evidence of long-ago volcanism and liquid water, it also made non-scientists care about them, and inspired new perspectives on life and climate here on Earth. Subsequent missions, such as the Mars Explorers, “lucky” Spirit and “indomitable” Opportunity, have added to the discussion.

While Mars explorers have been hunting for evidence of life close to home, Voyager 1 and 2, launched in 1977 and currently more than 15 billion kilometers away from Earth, remain the granddaddies of space exploration. Voyager’s iconic photos of the outer planets revealed the vast anticyclone of Jupiter’s Great Red Spot, volcanoes on Jupiter’s moon Io, and a vast icy ocean covering Europa. Scientists and non-scientists were amazed by the intricate gravitational dance of Saturn’s rings and humbled by the famous “Pale Blue Dot” photo of a tiny Earth nearly lost in a field of looming gas giants. Despite the power of that over-the-shoulder look back, the Voyager mission focused ahead, with each probe carrying a gold-plated copper phonograph record full of the sounds of Earth—from whalesong to Bach to Chuck Berry—in hopes of meeting some other intelligence on its journey. Amazingly both probes, obsolete by modern standards and running on “less than three light bulbs worth of power,” are still doing science.

The authors cover a broad array of diverse missions. The Stardust spacecraft’s mission, for example, traded remote distances for audacity. Stardust captured material from the tail of comet Wild 2, hopefully grabbed a few stray particles of interstellar dust as well, and brought it back to Earth. SOHO, the Solar and Heliospheric Observatory, studies the “hum” of sound waves reverberating through the Sun to chart solar structure and energy production. Other missions, from Hipparcos (“Astronomy’s Human Genome Project”), WMAP (Wilkinson Microwave Anisotrophy Probe), and the Chandra X-Ray Observatory to the Spitzer Space Telescope and the Hubble Space Telescope, have allowed researchers to study exoplanets and newborn stars, black holes, and the earliest moments of our universe. In addition, “citizen science” programs have put data from several of these missions online, allowing non-scientists to help by scanning images for valuable information.

In this well-balanced book, Impey and Henry offer readers an insightful look at the history and science behind each mission. Equally important, they deliver an expansive look at how those findings have influenced us, adjusting our view of the cosmos and our own planet.