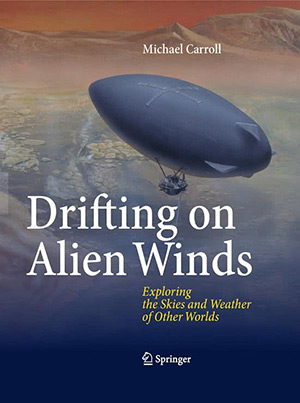 When human explorers set off to travel the solar system they will experience the wonders of other worlds much as described by author Michael Carroll in this book, Drifting on Alien Winds. Through his vivid descriptions, stunning photo assemblies, and inspiring original artwork, he takes the reader on a virtual ‘grand tour’ of our solar system.

The journey begins on our own planet with a useful overview of Earth’s atmosphere and weather. From Hadley cells and hurricanes, the water cycle, storms and lightning, to the 23.5 degree tilt off the plane of its orbit around the Sun creating Earth’s seasons, the author builds a foundation for understanding the physical dynamics on Earth and for studying what makes up the other planets.

Carroll describes the atmospheres, structure, and weather dynamics of the other planets in relation to that of Earth. He carefully compares the data and describes how planetary findings can influence understanding of our own planet, such as discovery of a natural ozone hole on Venus which helped scientists understand the ozone hole on Earth.

The author describes early plans for probes to the outer planets and discusses the engineering challenges of traveling in deep space. Technical issues like power generation, extreme low temperatures, and low light photography before the advent of the charge coupled device, had to be overcome. Each spacecraft from Mariner, Venera, and Pioneer, to Viking, Voyager, Phoenix, Cassini/Huygens, Galileo, and Magellan, is described along with its findings. The author follows up these analyses with a useful appendix, cataloging each mission’s vital details.

With data beamed back from the barrage of probes to Venus by Russia and the United States, Carroll describes the composition of the different cloud layers up to 44 miles above the surface, the intense pressure, and the surface temperature of around 873 degrees F.

He introduces us to the dusty plains, the polar caps of possible frozen water and CO2, and the thin atmosphere on Mars. The author probes the greatest question of Mars: did water once cover its surface, rush through its canyons and fall in torrents of rain, suggesting a climate hospitable to life?

Next is a visit to the gas giant Jupiter and its super storm, the Great Red Spot (GRS). Many scientists and authors describe the GRS as several times the size of Earth, but in some of his original visual work, Michael Carroll actually superimposes Earth over the GRS, illustrating the immensity of the Jovian storm that astronomers have observed for more than three centuries.

For Saturn he describes the massive lightning-filled thunderstorms, the whirlpool vortex at the south pole, and the hexagonal cloud patterns at the north pole. The Huygens probe, from the Cassini spacecraft in orbit around Saturn, landed on its moon Titan on January 14, 2005, helping to answer questions about its atmosphere and methane cycles.

Data from Voyager 2 proves Uranus to be as cold as Neptune, at -323 degrees F, even though it receives considerably more solar energy than its more distant neighbor. The blue gas giant Neptune features a turbulent atmosphere and possibly methane snow.

Many scientists initially believed that atmospheric wind speeds would be lower the further a planet is from the Sun. Voyager showed this to be false, as Neptune’s winds are stronger than Jupiter’s and all the giant planets have winds stronger than Earth’s. Findings such as these cause some scientists to doubt our real understanding of planetary atmospheres in the solar system.

In the book’s final chapters, the author envisions future planetary missions like unmanned aerial vehicles soaring through the skies of Mars, balloons riding the winds of Venus, hardened probes to Jupiter, or blimps in the skies of Titan which could lower a robotic craft to ride the waves of its methane lakes.

On this journey through the solar system, Michael Carroll introduces each planet with a textbook analysis of its structure, weather, and dominant features. But this visually attractive volume is way too much fun to read to be a textbook. If you have ever dreamed of exploring our neighboring worlds, you won’t want to miss this book. His planetary descriptions are filled with comprehensive and detailed temperatures, wind speeds, chemical compositions, and physical structures, while his engaging prose and stunning illustrations leave the reader with an overall feeling of thoughtful and buoyant wonder, as if “drifting on alien winds.”