Book Review: Earthrise: My Adventures As an Apollo 14 Astronaut 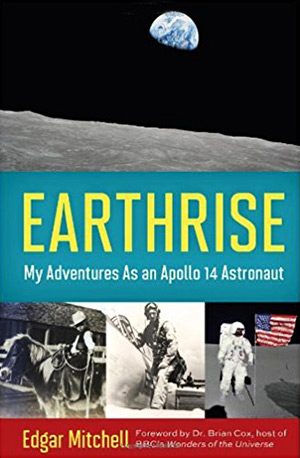 How does one prepare for the most seminal moment of one’s life — stepping off the last rung of the lunar module ladder onto the Moon and into history?

To answer this question, Edgar Mitchell, lunar module pilot on the Apollo 14 mission in 1971, has written a book about his life up to setting foot on the Moon and how this experience changed him for the rest of his life. Earthrise: My Adventures as an Apollo 14 Astronaut, is geared towards young readers in the 7th and 8th grades who are interested in space.

Dr. Edgar Mitchell is also the author of Paradigm Shift, The Space Less Traveled and The Way of the Explorer. He has received several medals: the Presidential Medal of Freedom, the NASA Distinguished Service Medal and three NASA Group Achievement Awards, and was nominated for the Nobel Peace Prize in 2005. He is the founder of the Institute of Noetic Sciences.

Mitchell’s journey began on a ranch in Texas and then in New Mexico, where he learned self-reliance and the value of hard work at a young age. He grew up amid stories of Buck Rogers, UFOs and nuclear tests in Roswell, NM. His love of flying began as a young boy when a barnstormer gave him a ride in a Jenny (a Curtiss JN-4 two-seater airplane). As a youth, he worked at local airports performing menial tasks just to earn money for flying lessons. By the time he was 16, he was a fully licensed pilot.

After graduating from Carnegie Tech with a degree in Industrial Management, he worked in the family business in New Mexico until enlisting in the Navy. He learned to fly many types of aircraft and saw combat in the Pacific. With the launch of Sputnik in 1957 and President Kennedy’s challenge to fly to the Moon and back, Mitchell’s focus turned to space. He wanted to be one of the humans who would fly into space. To do so, he earned a degree in Aeronautics in 1961 from the Navy’s Postgraduate School and a PhD in Science and Computers in 1964. He worked on the Navy’s Manned Orbital Laboratory and then became a test pilot at Edwards Air Force Base where he worked on the newest aircraft.

Mitchell was accepted into NASA’s group 5 astronaut training program in 1966. He was assigned to design and work on the development of the lunar module being built in Bethpage, NY (where I live!). Further training in simulators, in jungle survival training, and the sciences prepared him for his mission.

In January, 1971, Mitchell and his commander Alan Shepard and command module pilot Stu Roosa launched on their Apollo 14 mission. His matter-of-fact description of the mission is easy to follow and makes the reader feel that he or she is on the mission with him. The reader follows him through suit up, getting settled into the command module and then launching on the mighty Saturn V rocket. It was not until about three hours into the flight that the astronauts experienced a potential ending of the mission when Stu Roosa, the command module pilot, was performing a procedure called transposition and docking. Roosa, in the command module, had to attach the nose of the lunar module to the top of the command module. The two craft were lined up correctly but the latches failed to lock. The author explains every step of the process clearly: Shepard worked the docking mechanism while Roosa used the thrusters to provide extra force. Once this problem was resolved, the mission proceeded to the Moon. Mitchell’s enthusiasm and joy at seeing the Moon, landing and performing his tasks, is enticing. He explains what it was like to live and work on the Moon.

While on the Moon, and again when he looked at the Earth from the windows on the command module, he experienced life-changing moments. He felt a sensation which he called “metanoia” or change of heart or mind. This change refocused his life to explore the workings of the mind. He retired from the Navy in 1972 to devote his time to studying how the mind works.

I thoroughly recommend this book. As a docent in an aerospace museum where I teach about the Apollo program, I found the book corroborated all that I teach about the program. Dr. Mitchell’s matter of fact approach and wide eyed wonder at all he has experienced throughout his life, makes the book easy to follow and enjoyable. It was a fascinating story that detailed how one of America’s space hero’s journeys allowed him to experience all the successes in his life. I definitely recommend the book to all young people interested in space.