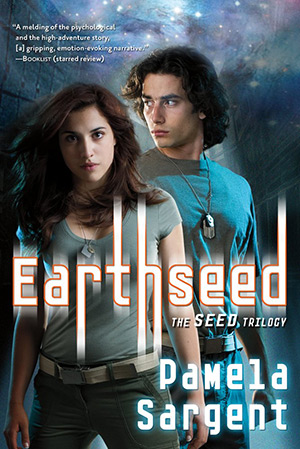 Earthseed by Pamela Sargent is the story of a group of teenagers being prepared to become the first human colonists of an exosolar planet.

Ship, an artificial intelligence, has been the children’s mother, father, and teacher for 15 years, and is now weaning them of dependence on it for their survival. To accomplish this, Ship has devised a race through the “wild” part of the hollowed-out asteroid where all sorts of Earth plants and creatures live, including bears. Ship has turned off its sensors in this area, so that the children are truly on their own with only their wits and stun guns for protection.

The main character, Zohert, is on a team with a boy named Manual that she is attracted to. To win, their team must cross the “Hollow” wilderness in the shortest time. They can use any route or method, but all team members must make the crossing for the time to count. The main competition is from a team led by a ruthless boy named Ho. The traps and tactics employed by Ho to slow down the other teams cause members of another team to be badly injured. Zohert insists on helping the victims, delaying her team and causing them to lose, and putting her at odds with Manual.

Many of the teens resent that Ho wins despite his tactics. But Zohert understands that Ho’s actions represent doing whatever it takes to survive: a trait that will be important on their new world. She also understands that it is up to the humans to decide how to act—Ship will not always be there.

Soon after the competition, the children, without the supervision of Ship, build homes and establish farms in the Hollow, the last step before moving to a planetary surface. Ho and Manual split from the main group and steal supplies from them. Revenge for the theft escalates to war. An appeal for help to the Ship reveals an even larger problem that challenges Zohert’s view of her world, herself, and her future.

Earthseed is an engaging story with strong characters and a convincing otherworldly setting. When it was first published in 1983, it was selected as a Booklist Young Adult Reviewer’s Choice and as an American Library Association Best Books for Young Adults.

I recommend this story to anyone interested in space settlement. As stated on the back of the book, the “big” question is can humans “overcome the biggest obstacle to the survival of the human race—themselves?” The book shows how a “simple” competition can lead to interpersonal conflict, factions, and war. As the main character discovers, survival of the fittest does not necessarily include survival of the nicest. The issues of how to deal with conflict as well as handicapped and injured individuals deserve at least as much discussion as propulsion and life support systems. These issues have implications for what sort of government might work best on a space colony, and also the role of parents and teachers in shaping the attitudes and motivation of the young who will inherit these new worlds. Future space colonists must decide what kind of society they would like to have, and what they are willing to sacrifice on a personal level to make it happen.

Fans of this book will be happy to know that the sequel, Farseed, is now available. An excerpt of this book is included in the back of the new edition of Earthseed. This sequel takes place 16 years later on the surface of the planet the original children colonized, with the main character being Ho’s daughter.