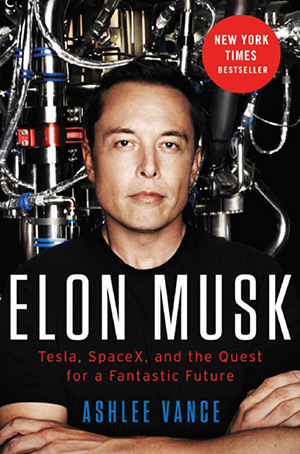 This book is part biography, part a detailed look into the history of Elon Musk’s companies, and part an explanation of why his current endeavors may have the ability to radically transform the future of humanity. The author uses his exclusive access to Musk, along with interviews of more than 300 of his co-workers, friends, family, and detractors, to provide an in-depth examination of his companies and accomplishments. Although SpaceX comprises less than half of the book, NSS members will understand the synergy between it and Musk’s other companies of Tesla and SolarCity and the driving force behind them.

The first two chapters cover Musk’s difficult life as a child in South Africa and eventual move to California. Even as a child, he made his own rockets and chemical compounds and says, “It is remarkable how many things you can get to explode. I’m lucky I have all of my fingers.” The book quickly follows Musk as he makes his initial millions through the sale of his first two companies, Zip2 and then X.com/PayPal. Yet even at this point, while others were celebrating the sale of PayPal at Hard Rock Café, the reader learns that Musk sat off to one side reading an old, moldy, obscure Soviet rocket manual.

The chapter entitled “Mice in Space” is a fascinating account of the genesis of SpaceX. The Mars Society proposed that Musk fund sending mice into Earth orbit and rotating them at Mars’ 1/3-G. Musk wanted something more inspiring, such as sending mice on a round trip to Mars or landing a “Mars Oasis” robotic greenhouse on the red planet. This led him to visit Russia to buy up to three intercontinental ballistic missiles as launch vehicles. Outraged at the asking price, Musk left in disgust and decided he would build the rockets himself. Investing $100 million of his PayPal profits, Musk acquired facilities in Los Angeles and hired top people from colleges and aerospace companies. New hires, disenchanted by work at other aerospace companies, were inspired by Musk’s vision. As one interviewee said, “Nothing sucks the fun out of working on a spaceship like controlling it with mechanisms last seen in a 1960s laundromat.”

The book goes into the exciting details of the early missions of the Falcon 1 and the incredible work SpaceX employees performed to solve early failures. One describes sleeping in a tent next to the rocket launch facility on a remote Pacific island where geckos climbed over him. It was “like Gilligan’s Island but with rockets.” Another recounts how, when transporting the fourth Falcon 1 from California by cargo plane instead of the normal barge, the air pressure of the cabin collapsed sections of the rocket. They repaired it in two weeks when it was estimated to take three months. All seemed to agree that working at SpaceX was simultaneously excruciating and wonderful.

Inexpensive access to space is an NSS priority, and the book gives examples of how SpaceX has lowered launch costs. The company creates 80-90 percent of everything needed, including rocket bodies, engines, motherboards, circuits, and sensors. A streamlined radio saves 20 percent of the weight and comes in at 1/10th the cost. An actuator to trigger a gimbal action that normally costs $120,000 can be made for $3,900. They load some of their rockets with both industrial standard and homemade parts to compare and ensure that theirs are just as good or better.

The book makes it clear that Musk has even bigger ideas: He wants to lower launch costs to the point where he can send thousands of supply trips to Mars and establish a settlement there. The book includes his full letter to employees that reiterates the goal of establishing life on Mars and not taking the company public “until Mars is secure,” i.e., a Mars transport system is in place. He also proposes refueling in orbit to reach Mars in three months at a cost per person under $1 million and would like to go permanently in his 70s. About his recent initiative to create an Earth Internet using satellites, he adds, “It will be important for Mars to have a global communications network.” The book opens with a question that Musk posed to the book’s author during one dinner: “Do you think I’m insane?” This book provides ample opportunity for the reader to decide.