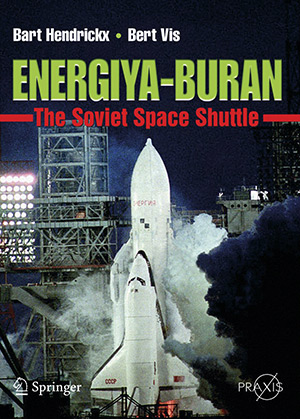 The Soviet Buran space shuttle only flew once. In 1988 it launched on the back of the Energiya rocket, orbited the Earth twice, and landed on a Baikonur runway, all using an unmanned, automated system. The full story of the massive undertaking that led up to this accomplishment has never been told — until this book.

Following in the footsteps of dedicated researchers of space history such as Asif Siddiqi, authors Bart Hendrickx (Belgium) and Bert Vis (The Netherlands) have compiled extensive data from a wide variety of sources into a very readable narrative, to continue the gradual revelation of the history of Soviet space programs. While the book’s dominant theme is the Energiya-Buran launch vehicle and orbiter, there is much more. The authors have done a creditable job of blending many interesting sidelights. The writing is authoritative, well presented, and with meticulous citations to allow the reader to dig further.

The Foreword by Igor Petrovich Volk (slated to be the lead Buran test pilot), laments what he calls ‘the premature demise of Buran.’ With the retirement of the U.S. Space Shuttle, Volk’s remarks that the Buran program “might have yielded enormous economical profit to the world” are in sharp contrast to the ultimate fiscal tragedy that befell the American Shuttle program.

Noted rather matter-of-factly, is that Buran was just another space project of the former USSR that never fulfilled its promise. What is revealed is the lack of a clearly defined role for Buran — it was apparently designed solely in response to the American Shuttle, whose military potential was a source of major concern to the Soviets. Unsure of just what that military potential was, the Soviets attempted to match the entire performance envelope! In doing so, they actually duplicated the technology, albeit a decade later. The nebulous claims of the high rewards of the ‘spin-off’ technology that would more than pay for the program are discussed and dismissed.

While NASA was trumpeting the lowering of the cost to low earth orbit (LEO) by a factor of 10, the USSR determined that there would be no cost savings! They believed that the American Shuttle program was primarily aimed at space based laser weapons. Afriam Akin, a scientist at the Soviet Academy of Sciences’ Institute of Applied Mathematics, is quoted as saying “So our hypothesis is that the development of the Shuttle was mainly for military purposes. Because of our suspicions and distrust we decided to replicate the Shuttle without a full understanding of its mission.”

Other Soviet authorities are quoted saying “…the Americans are very pragmatic and very smart. Since they have invested a tremendous amount of money in such a project, they can obviously see some useful scenarios that are still unseen from Soviet eyes. The Soviet Union should develop such a technology so that it won’t be taken by surprise in the future.”

While the book is essentially about the design, construction, and flight of the Buran ‘space shuttle,’ it also serves as a historical review of the Soviet space program. Although it has been told in several other books, this book’s succinct account  is worth reading for its political intrigue.

Much of the information about the designs and programs that were stillborn in the 1955-65 period have been lost, yet the authors have resurrected a surprising amount of detail. Perhaps the most exciting design, which plays a reoccurring theme throughout the book, was the Spiral launch vehicle that consisted of a hypersonic delta-winged ‘mother’ ship with a small lifting-body space plane strapped neatly on its back. Using a unique fish-scale-like heat shield that allowed for the expansion of the material, the propulsion relied on hydrogen-fueled rocket engines. Due in part to bureaucratic squabbling within the various agencies, its design languished in the late-1970s.

The authors indicate that the Soviets did not immediately respond to the announced intentions by the United States in 1969 of creating a reusable space transportation system. The various design bureaus were too busy trying to complete their lunar program and a space station. However, a study entitled ‘Multipurpose Orbital Complex’ was, in part, a look at the means to lower the cost to LEO. The focus of this was to be the massive N-1 rocket that was the foundation for their lunar program and the Multipurpose Space Bus Station which would allow the assembly and servicing of satellites on orbit in conjunction with their first generation space station.

Another of the fascinating aspects of the book is the chapter on ‘Organizations and Infrastructure’ that describes the political power structure and authority.  The segment on the design and production facilities might make you wonder how the Soviets ever made any progress. By the early 1970s, the USSR did not have a singular ‘aerospace’ industry. Rockets and missiles were the property of the Ministry of General Machine Building. Aviation related activities were under the auspices of the Ministry of Aviation Industry. A reusable space plane was therefore not wholly a part of either. The intrigue of the rivalries within their space industries is quite revealing and explains some of the reasons for the Soviet’s failure to be competitive with the United States.

One of the many remarkable facets of the Soviet space program was cosmonaut selection. Unlike NASA, the Soviets allowed several organizations to submit candidates for a given flight program. The most well known of these is the Cosmonaut Training Center based in Star City near Moscow that was established in 1960. This is where selection and training had been performed for the early Soviet manned programs (Vostok, Voskhod, Soyuz, and Salyut). The second is the Flight Research Institute that trained test pilots for the more traditional aviation programs. The third was the State Red Banner Scientific Institute. The book takes the reader through some very interesting descriptions of the cosmonauts and the demise of more than a few in accidents. The preliminary preparations of the first Buran crew candidates and their interaction with the Soyuz/Mir program are described in detail, including the juggling of Soyuz seats and the relative inter-agency squabbling. Appendices include brief bios of numerous cosmonauts.

During the American Shuttle’s early operational period (to 1986), the Soviets had continually downplayed it as wasteful and whose intended purpose was military. However, according to the authors, the public dissemination of information about the US Shuttle (especially its thermal protection system) may have saved the Soviets as much as $750 billion dollars in research and testing — not an insignificant sum. Until 1987, the Buran project was a state secret. One interesting section of the book deals with what the U.S. did and did not know about the program as it progressed.

The first (and only) flight of Buran is well documented. Progress towards the second was underway when the USSR collapsed. The impact on the space program was dramatic. The authors provide extensive quotes from both advocates and protagonists that echo the differences that divide the space science community in the U.S. today — cost vs. benefit; and the approximate 6:1 ratio between the price tag of a human flight and a robotic scientific mission.

Hendrickx and Vis detail several of the applications that might have been facilitated by Energiya-Buran. One revelation for many readers may be that the Soviets actually had their own SDI-type program well before President Reagan’s announcement in 1983. Because much of the impetus for Buran was military, most of the SDI type projects and even some conceptual offensive weapons payloads came to an end with Buran.

A wide array of international space projects were proposed to save Buran; including a project to restore the depleted ozone layer, launching radioactive waste into an orbit between Earth and Mars, and redirecting sunlight into the polar regions to increase crop yields. In the end, however, there was no line-up of applications to use the shuttle-like capability. With the end of the Cold War, the Soviets, faced with dwindling resources and not ever having made a substantive reason for its existence, nor having flown it as a manned spacecraft, cancelled Buran.

Toward the end of the book is a description of the status of the various launch facilities. In the concluding chapter entitled ‘Beyond Buran,’ several proposed rockets and space planes are evaluated. Few were funded beyond paper studies and none to full scale testing. A brief foray into the historical aspects of the SSTO is likewise interesting with combinations of scramjets and nuclear engines ensuring a complex and costly flying machine. The desire to replace Soyuz is still an enticing goal that has yet to come to fruition.

Overall, Energiya-Buran is a great book that deserves to be a part of every space enthusiast’s library.