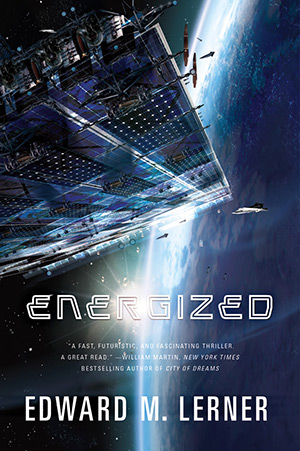 What will it take for people to embrace space solar power? And how could it be done using space resources?

Author Edward Lerner, a physicist and computer scientist, presumes a near future where the Middle East oil supply has been contaminated with radiation by terrorists, leaving Russia as the primary world oil supplier. In this scenario, the U.S. economy has tanked, and Americans are desperate for cheap energy options to run their electric cars.

A new near-Earth asteroid is fortuitously discovered heading towards Earth, and NASA redirects it into high orbit around Earth. There, our new moon, dubbed Phoebe, provides the resources to build the first space solar power station, and also a nearby playground for rich tourists.

The story opens with the mysterious murder of an engineer on Phoebe that is made to look like a suicide. Then the story jumps to three years later, with a NASA contractor, Marcus, helping NASA calm the fears the public has about the first solar power satellite being used as a weapon. The basic answer is that the beam of microwaves coming down from space will be carefully controlled and shut off automatically if it loses lock with the antenna on Earth.

But there are problems with the almost-ready satellite itself besides concern about the beam it will produce. One of these issues is simply that the array in space is large enough to block sensitive astronomical observations. A radio astronomer, Valerie, contacts Marcus and invites him to visit the Green Bank Observatory in West Virginia to raise his awareness of the issue and find ways to minimize this problem. When Marcus visits, we also meet Valerie’s coworker and friend, Patrick, an ostracized scientist accused of “losing” a space probe through mismanagement.

Another viewpoint character is Dillon Russo, an American investor who identifies himself with the “Resetters,” a group of people protesting any new energy infrastructure that might lead to further damage of Earth’s environment: including solar power satellite beams that they assume will cook birds flying through and cause other unknown damage. He is introduced as someone in the business of funding tech start-ups in the energy field.

The use of multiple (at least eight) viewpoints of mostly shallow characters made it difficult for this reader to become emotionally involved in the story. But the problems they were dealing with were unusual enough for me to keep reading. And I was pleased when the individual perspectives eventually connected and culminated in an interesting ending where all the loose ends tied up neatly.

Some readers may take issue with the premise that, with the Middle East knocked out of commission, the U.S. would be become dependent on Russia for its oil, especially considering the current energy boom and low oil prices. However, it is a given that oil is a limited resource that will become more expensive as sources require larger investments and environmental accommodations to reach production. Also, though a nuclear attack on oil may not be likely, oil facilities are certainly targets for more conventional attacks that could just as easily disrupt the world’s economy. So other scenarios could lead to the same conditions that would motivate people to pursue a safer, cleaner, space-based source of power, and others to oppose it. This book provides a lot of good food for thought on design considerations and safeguards needed to address both the realistic and unrealistic fears and hopes people have about space-based power.

Space enthusiasts will appreciate the accurate and plausible science underpinning Energized. Lerner reveals in his Afterword that after attending an asteroid deflection research symposium in 2008 as a member of SIGMA, a group of science fiction authors who consult for the government, he took up the challenge from his publisher to write a story about energy issues. As research for the book he flew a space shuttle simulator, toured the space station simulator, observed a shuttle launch, attended an astronomy program for authors, consulted with NASA powersat experts, and toured Green Bank Observatory. Many National Space Society members will sympathize with his remark that, “I only wish I’d had the opportunity, too, to visit a solar power satellite.”