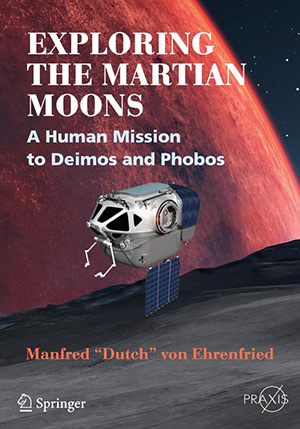 Should NASA’s first Mars mission be a visit to the Red Planet’s two moons, Phobos and Deimos? Author Manfred “Dutch” von Ehrenfried, who was a NASA Flight Controller on Mercury, Gemini and Apollo and worked in both the Flight Control and Flight Dynamics Branches, states emphatically it should. He proposes that a visit to the Martian moons could be performed years or even decades earlier than a Mars surface mission, and can be viewed similar to the Apollo 8 and 10 missions which preceded the Apollo 11 Moon landing. In this book, Dutch provides an in-depth analysis of NASA’s near-term space systems and how they might be used in such an endeavor. NSS readers will learn the intricate details about the systems being developed, the organizations involved, and the challenges still to come.

In Part I, “The Current Plan,” the author delves into the core components of the Space Launch System (SLS), the Orion capsule, and the European Service Module (ESM), since these are integral to proposed future NASA missions. Pictures of their components, with paragraphs devoted to each, provide readers with a deep understanding of every element. For example, readers can learn the operating temperatures, dimensions, weight, and thrust of the current RS-25 engines used by the SLS, and information about Orion’s six main subsystems and the avionics computers’ processors and bus speeds. The author then packages these elements in the “stack” needed to go to Mars: a propulsion section, ISS derived deep space habitation module, multi-purpose logistics module for storage and docking, Orion, ESM, and at least one Space Exploration Vehicle (SEV) to allow a crew of two to leave the stack and explore Phobos and Deimos.

But this hardware alone is insufficient. Dutch reviews the key enabling technologies that will be required and explains the 15 long “roadmap” documents used by the Human Exploration and Operations Mission Directorate. These address enhancements needed in areas like launch propulsion, in-space propulsion, space power and energy, communications, life support, and more. Readers can explore learning about Friction Stir Welding (FSW), which is being used to reduce the weight of Orion and the SLS, and Rapid Cycle Amine (RCA), which is more efficient than metal oxide canisters in removing carbon dioxide. And to design protective measures for Orion and the future Habitation module, “the Phantom of the ISS,” a model of a human head and torso with over 300 dosimeters inside, is being used to measure the radiation that would be absorbed by various organs.

After having covered the current hardware, systems, and future technology enablers, Dutch explains there is currently no detailed design reference document for a Mars moon mission, and so explores the options. In Part II, he compares placing the stack, upon arrival, in high Mars orbit and using the SEV for two astronauts to visit each moon, to the alternative of moving the entire stack closer to each moon, in turn, to reduce the SEV travel distances. And even the SEV has multiple options. It can either land or tether a short distance away from the moon. And if tethered, an astronaut with a Manned Maneuvering Unit could slide down the tether to the moon, or the astronauts can “fish” for moon material directly from the SEV. But when Dutch mentions how high an astronaut could jump from each moon, and how long he would take to reach peak altitude, I had a whimsical moment wondering if he meant for the SEV to snare the leaping astronaut after his or her exploration was completed.

Given the huge number of details in this book, it is not something that you can simply sit down and read, but instead can keep as a reference document. For example, the last chapters list all of the Prime and Support Contractors, NASA test facilities, other country agencies, and each ones’ histories and responsibilities. And for good measure, seven appendices provide information on the various probes already sent to Mars, the multiple Mars analogs, commercial spacecraft, launch vehicles, station keeping orbit options, and even quotes about space exploration.

NSS members looking for specific details about what NASA is building, and the various organizations and companies involved, will find much in this book to satisfy them. And since the format somewhat resembles a reference document, sections can be read or skimmed as desired. Along the way, readers will learn not only some fascinating technical information about NASA’s space exploration infrastructure, but also how it could be used to implement a future mission to the Martian moons.