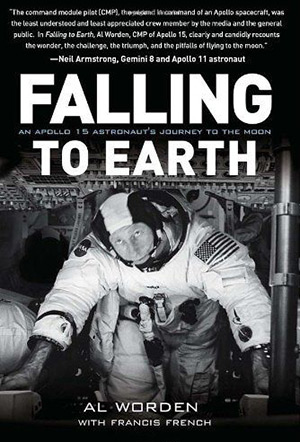 Everyone makes mistakes, though some are more public than others. In Colonel Al Worden’s new memoir Falling to Earth, he finally opens up about his mistake regarding the Apollo 15 postal cover scandal that cost him his job at NASA.

Worden’s memoir starts, just as Worden did, on a farm in Michigan, which assists in the reader’s understanding of his upbringing. Worden also inserts some humor into this part of the book, which otherwise would have been fairly dry.

Then, of course, Worden tells readers about his time with NASA. He discusses the circumstances surrounding his divorce, and his fear that it would affect his future with NASA. He also talks about the meetings that lead to the now infamous postal covers and everyone’s role in the scandal.

According to Worden, the scandal occured when he and the other Apollo 15 crew members accepted payments in exchange for signing and flying with postal covers that would then be sold years later. However, the other party did not hold to their part of the agreement and sold the postal covers much too early.

Worden was one of only 24 men to travel to the Moon, and like the others he was hailed as a hero upon his return-receiving invitations to take part in celebrations and parades, and commendations from politicians at a local and national level-until the word of the sale of “Apollo 15-flown postal covers” reached his NASA employers. At that point, all the revelries of a hero, as well as any hope of a future with NASA, disappeared. Little did Worden and the Apollo 15 crew know at the time, the NASA employers had just dealt with similar issues from a past mission, and were looking to make an example out of Apollo 15.

Worden is very open about his past and all of the mistakes he made, and even admits to regretting some of those past events. He also discusses how his feelings changed toward his fellow crew members, as well as his NASA employers, throughout the events that followed the mission.

Falling to Earth is the latest in a long line of astronaut memoirs, and, like the others, it does not disappoint. It is written chronologically, starting with his youth in Michigan and concluding in the present day.

Overall, the book is cleverly written, right down to the double meaning of the title. Falling to Earth should be read by any space/NASA enthusiast, especially those who want to know the truth about the postal cover scandal or more about Al Worden and his Apollo 15 crewmembers.

Mike White is a freelance journalist based out of a suburb of Chicago, Ill.