Book Review: First Contact: Scientific Breakthroughs in the Hunt for Life Beyond Earth 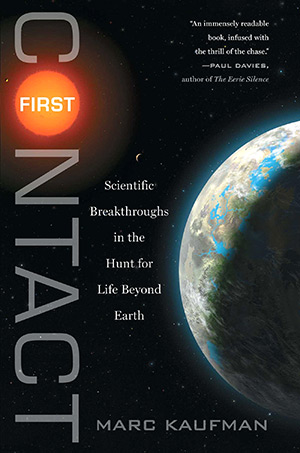 Before the end of this century, scientists will find extraterrestrial life somewhere in our universe: First Contact.

It’s a startling statement, but according to Kaufman, we’re already well on the way. Recent observations have revealed at least 500 extrasolar planets orbiting other stars, and the search has only just begun. Statistics hint that it’s highly unlikely that ours is the only planet to harbor life in the entire universe. But how do we tell if a distant world supports alien life? How do we recognize it, and what do we do when we find it?

Kaufman’s exploration of the subject shines with lucidity and rigor, without sacrificing accessibility. Better yet, it captures some of the intrigue and adventure of the front lines of discovery. The author begins with a look at the wild, romantic science of astrobiology, the study of the origin, evolution, distribution, and future of life in the universe. In astrobiology, the most productive researchers are intuitive and highly cross-trained, “part Carl Sagan, part Indiana Jones, part Watson and Crick, and part CSI: Mars,” drawing on biology, chemistry, astronomy, physics, geology, and more than a little bit of luck.

Before we can hunt for alien life, Kaufman points out, we need to figure out just what it means for something to be alive. We’re very familiar with carbon-based life, since it’s all around us. But life-bearing worlds aren’t likely to resemble Earth, and the life they support won’t look familiar either. Fortunately, we have alternate examples of life right here on Earth.

Certain species, known as extremophiles, exhibit amazing skills of survival in extreme environments. Kaufman describes an amazing array of creatures, from microbes swarming through the supercold waters of Antarctica’s Lake Bonney or wafting inside clouds 12 miles above Earth’s surface. Others feast on sulfur from superhot hydrothermal vents deep underwater, or inside 180 degree F geysers at Yellowstone National Park. All are examples of how life adapts to thrive in unexpected environments.

Some even challenge our idea of what it means to be alive. Kaufman offers evidence like the microbes living deep inside a South African gold mine that feed on radioactive decay in the rocks around them. They haven’t seen light in more than three million years, but they do have DNA and reproduce — if only once per century.

Given their tenacious existence, how can we deny the possibility that almost any distant planet could be home to even more unusual life forms? If we assume that weird life is out there, how do we decide where to look for it? The exoplanets found so far hint that our own solar system may be a terrible example for comparison. We expected to find rocky worlds near stars and gas giants relegated to the outer reaches of each solar system. Instead, it turns out that exoplanet gas giants often orbit close to their suns in quite eccentric orbits, rather than the relatively circular ones we see close to home.

What if extraterrestrial life is intelligent and technologically advanced? SETI (Search for Extraterrestrial Intelligence) has spent 50 years scanning for radio signals from an alien race seeking other life forms. Passively watching the skies is tedious, but safe. Kaufman points out the potential danger of actively pinging — sending radio or laser messages out to tell the universe we’re here. After all, there’s no reason to assume the extraterrestrials receiving the message will be friendly.

Kaufman, a science and space reporter for the Washington Post, knows his stuff and delivers a first contact primer that’s as accessible and intriguing as it is vivid and thoughtfully written. The discussion focuses on finding and identifying alien life, leaving the mysteries of communication and alien intelligence well alone. His point is simple: Life is not only diverse, it is also very, very stubborn. It has managed to gain footholds nearly everywhere here on Earth, from chilly Antarctic waters to bleached Death Valley soils; from the volcanic depths of the Pacific to the bleak northern tip of Norway; from lofty clouds to mines and mineral veins 10 miles underground.

Given that evidence, the suggestion that extraterrestrial life exists is not only natural — it’s purely logical. After all, as Kaufman points out with a hint of wistfulness, “if it’s just us in this universe, what a terrible waste of space.”

Charlene Brusso is a science writer and reviewer working outside Rochester, N.Y.