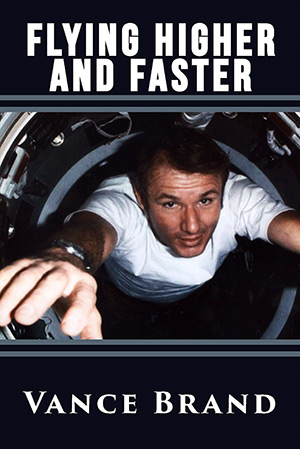 Vance Brand belongs to the same generation as the Apollo astronauts. He’s only a year younger than the Apollo 11 crew, but he joined NASA just a little too late to fly to the Moon. He was a member of NASA’s fifth group of astronauts, selected in 1966; of the 19 members of his class, only about half got seats on lunar missions, and most of them flew as Command Module pilots who got tantalizingly close but never made those last few miles to the lunar surface. Nevertheless, Vance played a part in getting America across the finish line of the Moon race, and went on to a distinguished flight career in the Apollo-Soyuz mission and Space Shuttle programs.

Like Neil Armstrong, Vance was one of the few civilian test pilots selected by NASA as astronauts in those days. But all the pilot astronauts came from military backgrounds. Vance got his initial flight experience with the Marines, then went back to school to get an aeronautical engineering degree, continuing to fly as a reservist. After graduation, he became a test pilot for Lockheed, and a couple of years later, he got one of the civilian slots at the Naval Test Pilot School. Lockheed then assigned him as an advisor to the West German Air Force where he helped them to reestablish a flight test division of their own and taught them how to fly the F-104 Starfighter safely. That aircraft was known as the “missile with a man in it,” and the accident rate in its first years of service was alarmingly high.

After joining NASA and spending a year in training, Brand’s first assignment was a week-long test of the Apollo Command Module (CM) in a vacuum-thermal chamber—an assignment with all the danger of an actual spaceflight, except for launch and reentry. It was an important test to show the CM was ready to fly, after an extensive redesign following the Apollo 1 fire that killed three astronauts on the launch pad. After that, he served in support crews (one step below backup crew) on Apollo 8 and Apollo 13, then backup crew on Apollo 15. That put him in line for a lunar flight as CM pilot on Apollo 18. The Moon flights were cancelled just one mission too soon for him.

He then served as backup commander for two of the Skylab flights. Here he recounts a bit of overlooked history; a leaking attitude control system on the Skylab 3 Service Module while the Apollo ferry craft was docked with the Skylab space station led NASA to believe it might not be safe to use for reentry by the time the mission was over. While the Skylab 3 crew continued their mission, safe in the space station, Brand and fellow backup crewman Don Lind went into intense preparation to fly a rescue mission to bring them home. Eventually NASA concluded this wouldn’t be necessary, and Brand lost a chance to make history of the sort described in Martin Caidin’s novel, Marooned.

Finally, in 1975, Brand got his first spaceflight, the one and only Apollo-Soyuz mission. Along with Tom Stafford and Deke Slayton, he made the first international rendezvous in orbit with Russian astronauts Alexi Leonov and Valeri Kubasov. A flight intended to show that the Cold War was thawing, it was the only time Americans and Russians shook hands in orbit until the Shuttle-Mir flights two decades later. Brand devotes a chapter to the goodwill tours the crews made after they got home, including an interesting look at the Middle East and its view of America in this period.

It was the first decade of the Shuttle era where Vance came into his own as commander of three Shuttle flights: STS-5, the first “operational” Shuttle flight; STS-41B, which included the first untethered spacewalk; and STS-35, in which the Columbia obiter acted as a human orbital observatory. That last flight included a spectacular night launch and a night landing at the Cape. Vance describes the challenges and the fun of these flights vividly.

For pilots, it’s all about flying higher and faster, and Vance is at his most eloquent when describing those aspects of his experiences. As with most astronauts, some of Vance’s most dangerous career moments weren’t in space: they were in airplanes. As a fellow pilot, I found my palms sweating more than once while reading his chapter on “An Airplane Accident and Some Close Calls.” Either he’s a master of understatement or has a wonderfully droll sense of humor when he concludes one particularly harrowing episode with this gem: “I had experienced flameouts [loss of engine] before in the T-33, but a double flameout at night in the T-33 was more troublesome.” He closes the book with a chapter comparing the flight characteristics of the Apollo and Shuttle spacecraft (something I’ve never seen in any other astronaut autobiography, and something he’s almost uniquely qualified to do), and an exhortation to head for Mars.

This memoir is self-published, and although the production values and overall quality is higher than many such, it suffers from the lack of a professional editor. Vance could usefully have expanded parts of his narrative, and made it more chronological. Still, it’s a good addition to the literature, and a unique perspective from one of the handful of astronauts who straddled the first and second waves of human spaceflight.