Book Review: Foothold in the Heavens: The Seventies 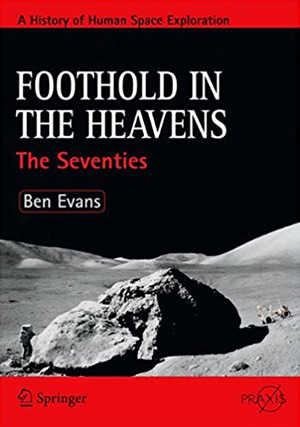 Foothold in the Heavens: The Seventies is an exciting and comprehensive analysis of the history of human spaceflight. Ben Evans’ second book in a planned five-volume compilation celebrates many of the American and Soviet Union’s triumphs, and sheds light on Soviet tragedies that have lingered in the shadows of secrecy for so long. [See review of the first book: Escaping the Bonds of Earth: The Fifties and the Sixties.]

The launch and hard docking of Soyuz 4 and 5 on January 16, 1969, with the first extravehicular crew transfer, showed Soviet daring and ingenuity. At the same time, denial of the harrowing and near-deadly re-entry of Soyuz 5 displayed the misleading nature of the Soviet State. Evans analyzes Soviet mishaps, such as the failed Soyuz 6, 7, 8 rendezvous and docking, while also including successes like the first-ever night-time launch of Soyuz 9, for its record-breaking 18-day mission.

The author adds depth to the narrative by placing the space missions into context with the associated politics and world events of the time. Leonid Brezhnev was nearly assassinated in January 1969, while hundreds of thousands of dissidents fled the “workers’ paradise” and the major economic miseries of the Soviet Union. America struggled with the My Lai massacre, the battle at “Hamburger Hill,” Kent State protests, and the political and social upheaval of the Vietnam War.

Evans picks up the U.S. Moon program with the first intravehicular crew transfer, and test of Lunar Module (LM) 3 in Earth orbit by Commander Jim McDivitt and NSS Governor Rusty Schweickart on Apollo 9.

Apollo 10 made the only Saturn V launch from pad 39B at Kennedy Space Center and only the second flight to the Moon. Commander Tom Stafford and Gene Cernan separated from John Young in the Command Module (CM) Charlie Brown to make the dramatic descent in the LM Snoopy to within 15.4 km of the lunar surface, paving the way for the first landing.

The author covers each human mission in this narrative with comprehensive and interesting detail, but Apollo 11 is definitively the cornerstone of this volume. The mission is chronicled from crew selection and training, to launch and translunar injection. Descriptions of the penetrating tension in mission control help readers ‘relive’ the historic events, right down to illumination of the lunar contact light at 4:17:39 pm on July 20, 1969.

There were many triumphs, but the Soviet program was visited by its own tragedy in July 1971. Georgi Dobrovolski, Vladislav Volkov, and Viktor Patsayev died from suffocation when an open valve caused decompression of Soyuz 11 during re-entry. It was determined that the crew would have survived if they had been wearing pressure suits. This discovery initiated a reevaluation of pressure suit use in the Apollo program, and caused astronauts to wear them during critical mission phases.

After insightful analysis of the Soyuz/Salyut program, Evans returns to the U.S.’s exploration of the Moon and describes the details of Apollo 11’s surface operations until lunar liftoff and docking with the CM Columbia at 5:38 pm July 21, 1969. He follows the astronauts through trans-Earth injection, splashdown in the Pacific, and quarantine in the lunar receiving laboratory. The author describes world reaction to Apollo 11, noting one Czech writer who told his readers, “this is the America we love, one so totally different from the America that fights in Vietnam.”

Evans highlights the dramatic moments of the lunar missions, helping the reader be there for the lightening strike of Apollo 12, the oxygen leaking from Apollo 13 after its tank exploded, and the cliffhanger descent of LM Antares as mission control worked around computer problems on Apollo 14. One of his vivid descriptions includes Alan Shepard and Ed Mitchell trying to sleep in the noisy LM on the Moon. “Ed? Did you hear that?” Shepard whispered. “Hell yes, I heard that.” “What the hell was that?” “I don’t know.” A few seconds passed. Then: “Ed?” “What?” “Why the hell are we whispering?”

The J missions of Apollo 15, 16, and 17 are described through the scientific bonanza of their surface expeditions. The book concludes with Gene Cernan and Harrison Schmitt lifting off from Taurus-Littrow on December 14, 1972.

In his second volume, Ben Evans has continued a great achievement, shining a bright light on the details of human space exploration. Along with his first book, titled Escaping the Bonds of Earth, Foothold in the Heavens deserves a place in every library. If, unlike most space enthusiasts, you need an excuse to get another space book, get this one because it was written with the most current insight available and gives a complete and up-to-date history of the Soyuz and Apollo era.