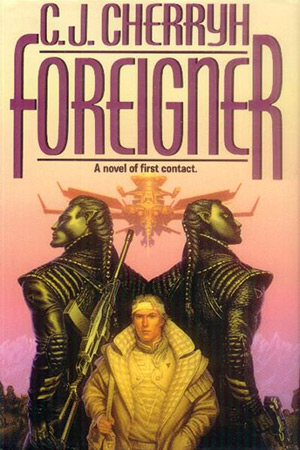 Humans lost in space establish a space station in orbit around a planet inhabited by a race that has reached steam-engine level on its own. The ship leaders oppose contact with the aliens, and after the station is equipped, they leave to look for another world. Eventually the station is abandoned in favor of living on the new world. But inability to understand the alien culture leads to a war that the greatly-outnumbered humans lose. A peace treaty limits the humans to living on an island and trading technical knowledge for raw materials with the native atevi through one human translator/interpreter, the paidhi.

Over 200 years, the paidhi have guided development of industry from a steam-engine level to the beginnings of a space program. The impact of this rapid development has wreaked havoc on atevi society and religion, with dissention held in check by a strong central authority legally enforced through an Assassins Guild.

When the current paidhi, Bren Cameron, is targeted for assassination, he quickly discovers how little he really knows about his native hosts, their culture, and motivations. He must discover who wants him dead and why, realizing that if the central leader of the atevi loses power, the treaty, the space program, his life, and even continued human existence on the planet may all be forfeit.

I found this book to be absolutely fascinating. The character and the environment are complex, and the cultural and political and psychological issues of living on another world something I have not seen so well explored before. The book opens with a brief “back story” about how the humans were stranded, and how they dealt politically with the sacrifices necessary to survive. Then the book jumps to a future time after the station is in orbit around the inhabited world and the human debate about landing on the planet. After another brief story about first contact, the primary story begins 200 years later with the assassination attempt on the paidhi. The bulk of the story is then about how this one man, isolated and immersed in the alien culture, learns how to interpret and translate not just the language, but the meaning behind actions and word use. His discoveries of the sometimes subtle and sometimes profound effects of cultural perspective offer interesting parallels to current western attempts to understand the impact of eastern cultures and religions on trade and political issues.

Another aspect of the story that is very pertinent to current plans for space is the consideration of how the environment of another world will change human culture and society. For example, the impact of introducing human-compatible biology into another system has mostly been discussed in terms of changing diets to what will grow in the environment, or allowing for any simple alien life discovered to be preserved in some sort of protected habitat. The general feeling is that human-compatible biology and housing and manufacturing facilities being required for human survival in space, they must be brought along, supported, and adapted to using the available resources. But the way the resources are harvested, utilized, and even transported can make a huge difference to the future development of the culture of the settlement. For example, in Foreigner, the paidhi is concerned with transportation issues such as the impact of roads versus trains on the landscape, commerce, and future energy and manufacturing needs.

C.J. Cherryh’s Foreigner series also delves deeply into the human propensity for political factions and difficulty with setting aside differences for the common good. These issues are first seen in the colonists rebellion against the station leaders who do not approve them going down to the planet. Internal human politics complicate the paidhi’s job especially in the books that follow. Foreigner comes to a rather abrupt end, but readers will be glad to continue the story of Bren Cameron in this 9-book series. I found book 2 even more compelling, and extremely difficult to put down, even to eat and sleep! Here is the order of the titles: Foreigner, Invader, Precursor, Defender, Explorer, Inheritor, Destroyer, Pretender, and Deliverer.

We may never encounter an intelligent alien species, but if we seed human colonies in different enviroments, over time, those inhabitants will surely develop a culture unique to them and reflective of their environment. Some people humorously say that Brits and Americans (and we might add Australians) are one people separated by a common language. How much more so will human culture and language change on the Moon and Mars or an L5 colony? Through her books, C.J. Cherryh, a member of the NSS board of Advisors, is helping prepare us for the profound cultural change that space development will bring to our future. I highly recommend that NSS members read and discuss the issues raised in these books. I wouldn’t be surprised at all if NSS members become the future equivalent to “paidhi” between space settlements and Earth!