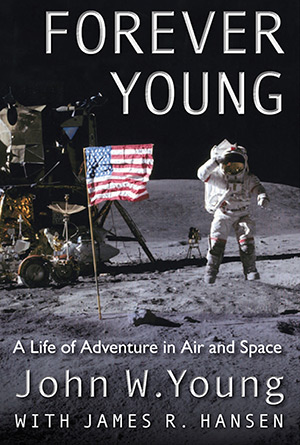 If you have been waiting for a book from the only moonwalker without one, you will not be disappointed with Forever Young: A Life of Adventure in Air and Space. John W. Young, with James R. Hansen, has written the epic story of his life not only of adventure, but service to his country and inspiration for the future.

He was born September 24, 1930 and grew up modestly in Cartersville, GA and Orlando, FL. He built model airplanes, played sports, worked at the local Piggly Wiggly, made straight A’s, and graduated from high school in 1948. Young entered Georgia Tech on a Naval ROTC scholarship and graduated second in his class with a Bachelor of Science in aeronautical engineering. He hoped to be rewarded with his first choice as a naval aviator, but was ordered to the destroyer USS Laws. Young was finally sent to flight training at Pensacola, Florida, on May 8, 1953 to begin his career soaring above the Earth, and was awarded his gold wings in December 1954.

After the heart-stopping business of carrier landing qualification and two cruises to the Mediterranean, he was sent to his dream job, the Navy test pilot school at Patuxent River, Md. In November 1959 he graduated second in his class and was assigned to armament tests of the all-weather F-4 Phantom. With all the right qualifications he was selected in the second group of nine NASA astronauts in September 1962.

With his assignment to Gemini III, Young was the first of his astronaut class to fly in space. Young’s gripping account of the Titan rocket launch on March 23, 1965 almost makes the reader feel like they are sitting between Commander Gus Grissom and Young in the spacecraft. His vivid recollections nearly allow one to smell the corned beef as he offers Grissom the smuggled sandwich. He covers his three-day Gemini X mission with pilot Mike Collins in even greater detail as they took on a far more ambitious flight plan. The tasks included rendezvous and docking with an Agena target vehicle, which was used to boost Gemini X to a new record high orbit.

Aboard Apollo 10 in May 1969 he became the first human to fly solo around the Moon, as he piloted the command module Charlie Brown, in preparation for the Apollo 11 landing.

His next mission as commander of Apollo 16, which made him one of only 12 people to walk on the Moon, almost ended in a disappointing abort prior to landing. With brilliant procedures and a bit of daring from Mission Control, they worked around a problem with the command module thrust vector control. Young and Charlie Duke then landed the lunar module Orion at the Descartes highlands on April 20, 1972. His thorough descriptions help one imagine climbing down the ladder to the lunar surface for three moonwalks of scientific exploration, which helped to rewrite our understanding of the Moon.

Young stayed at NASA, and was appointed chief of the Astronaut Office in January 1974. He was then chosen to command the first-ever launch of the reusable Space Transportation System (STS). He relives the dynamic liftoff of Columbia on April 12, 1981 as he and Pilot Bob Crippen rode to orbit for an ambitious two-day workout of the spacecraft. At the 25-year anniversary of the mission, NASA Administrator Mike Griffin called STS-1 “the boldest test flight in history.” He was again in command of Columbia on STS-9, November 28, 1983. Little noted in history, STS-9 could have ended in disaster when the general purpose computer (GPC) 1 and GPC 2 failed in orbit. The crew expertly restored GPC 2 and landed safely at Edwards AFB. But GPC 2 failed again at nose wheel touchdown and two auxiliary power units were on fire at landing.

Young discusses the Challenger tragedy at length and includes almost all of his testimony to the Rogers Commission, which was appointed by President Reagan to investigate the accident. Young also states unequivocally that the astronauts were not aware of the full history of problems with the solid rocket boosters and were not told of the recommendation from several engineers not to fly.

After the shuttles returned to flight, Young and others voiced concerns about debris strikes, but once again NASA minimized the concerns and continued to take risks. Space Shuttle Columbia was lost on February 1, 2003. NASA knew before reentry that foam from the external tank had hit the left wing of the orbiter, but the decision-makers thought there was no serious damage, and that nothing could be done if there was.

Young retired on December 31, 2004 after more than 42 years with NASA. Today he continues to advocate for a return to the Moon for exploration, a base for learning to live in space, and to solve problems on Earth such as power generation. He is also sounding the alarm to track near-Earth objects and devise tools and plans to deflect objects that will eventually be on a collision course with Earth.

What makes this book different than other astronauts’ memoirs is the comprehensive technical detail he uses to describe each of his missions and his entire career at NASA. He not only describes the shaking of the mighty Saturn V at launch, but also tells why the oscillations occurred. The book has the depth of a NASA mission report, but reads like the smooth flowing prose of a novel. Everything one would expect to read about his life of adventure in air and space, and much more, is recorded for posterity in Forever Young.