Book Review: From Jars to Stars: How Ball Came to Build a Comet-Hunting Machine 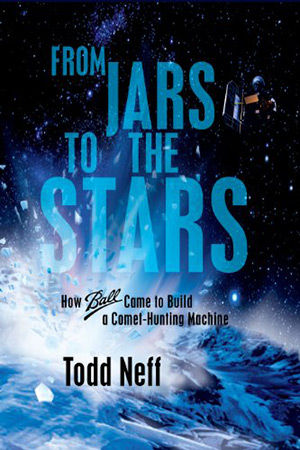 The title of the book, From Jars to the Stars, is intriguing and immediately captures the reader’s attention. The book, by a former Colorado science reporter, Todd Neff, does not disappoint. It is a fast paced book about a company that mirrors the birth and growth of the aerospace industry in a way that is easily understandable and enjoyable.

Approximately one third of the book is devoted to the history and evolution of the company, which would become the present-day Ball Aerospace and Technologies. While the first few chapters are a little dry, the information is necessary to lay the foundation for the growth of the company. The author introduces the reader to the scientists, engineers and managers who created and developed each new product from scratch, succeeding in creating the seemingly impossible through trial and error and technological breakthroughs. Throughout the book, there are photos of the players and the products that were being created as well as charts which further enhanced the reader’s knowledge about the company.

The company began as the Wooden Jacket Can Company in 1880 in Buffalo, NY. The five Ball brothers founded the company to sell wood-jacketed tins they manufactured to hold paint supplies. The company’s name was changed to Ball Brothers Glass Manufacturing Company to identify its expanded product line that included glass (Mason) jars used for home canning. In 1887, the company moved to Muncie, Indiana to be closer to more sources of natural gas for the factory.

Over the years, the company expanded by acquiring smaller glass manufacturers. This growth mindset, which continues to this day, helped them produce an ever increasing and expansive array of products both for the consumer, for agriculture and most importantly for us, for space.

In the 1950s, the son of one of the founders inherited a company that was complacent in its jars and bottles manufacturing. In an effort to reinvigorate it, he purchased a scale company in Boulder, Co, a move that would prove to be the catalyst for the company’s entry into the aerospace industry. In 1956, this scion of the jar manufacturer became Ball Brother Research Corporation, with the mandated purpose to pursue research and development in the sciences and engineering. It proved to be an ideal setting. For, in Boulder at that time, in the Upper Air Laboratory of the Physics Department at the University of Colorado, there was a group of engineers and scientists who won an Air Force contract to build pointing devices that were incorporated into sounding rockets to study the sun. The researchers at Ball and the academics at the University soon joined forces to build increasingly more sophisticated instruments, rockets and other space materials. Many of the Ball engineers and scientists were graduates of the University of Colorado.

The second section of the book takes the reader through the growing pains of creating not just instrumentation but the vehicles to take this technology into space. Their first success was in developing and building the first seven Orbiting Solar Observatories for NASA. These early satellites were used to study the sun.

As Ball employees became more confident in their products, management went after bigger projects, including an ingenious concept to rendezvous with a comet and send an impactor into it to study its composition. The story of the company’s work on Deep Impact occupies almost one-half of the book. The story begins with winning of the contract, then moves through the building of the twinned spacecraft: one of which would impact comet Tempel 1, and the other that would observe the impact as it flew by the comet. As costs mount and timetables slip, the players become familiar through Mr. Neff’s biographies of them, his recounting of management decision-making processes, and the company’s interactions with NASA and the Jet Propulsion Laboratory. By the time the book got to the Deep Impact launch (which occurred in January 2005), this reader was keeping her vigil along with the Ball people and shared in their joy as the craft and its companion fulfilled mission plans. (It impacted Comet Tempel 1 in July 2005, and in an extended mission, reached comet Hartley in November 2010.)

With the success of Deep Impact, this part of the company, known as Ball Aerospace & Technologies Corp., went on to achieve success in providing the technologies for Kepler and other spacecraft. Coupled with this, the parent company, Ball Corporation, diversified into other products after spinning off its canning jar operation.

The author writes in a style that is easy to read and understandable. He provided much insight into the people, through interviews and anecdotes, who made this company so important to the aerospace industry and to our further understanding of space. There were some typos. Facts have been checked and verified by this reviewer, both from the company’s website and other sources.

This is a book that everyone interested in the growth and development of American technology and space history should read. As was mentioned above, the story of this company could be the story of the growth and evolution of all the major aerospace companies today. NSS members will enjoy the book and find many known references to historical events and craft throughout it. It is also a good beginning book for young adults yearning to understand how we developed the craft and the instrumentation to learn about our planet and the universe.