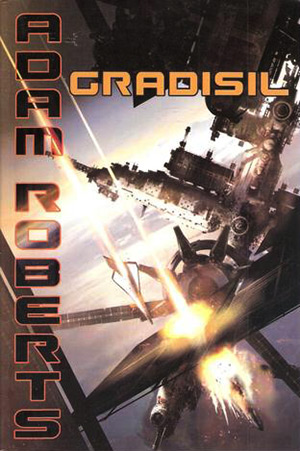 This is one of the better science fiction books I have read. It moves with action and suspense. It covers three generations involved in the migration to space, nation building, and the intrigue of politics.

The book is centered on the migration into single family space dwellings in low orbit. These are odd settlements in that each one seems to house one person and/or family. They are basically individual houses orbiting the Earth. The author calls them “tin cans.”

In order for people to get to and from their houses in space, they use a vehicle called a “Waspstar.” One of the main characters, Klara, worked on the Waspstar, “converting an old Electror private jet into a spacecraft, which was simply a matter of mounting a generator and running Elemag coils the right way around the wings and the belly.” Once Klara and her father converted their Waspstar, they could fly into orbit, just like that. These planes were also called Elemag.

One of the qualifications about living in low orbit, called the “Uplands,” is that you had to be a young adult. Babies and youngsters would not grow up properly in space and therefore were kept in gravity until their bones were as strong as they would get. The bones had to be strong to counteract the zero gravity of space. Rich people go to the Uplands to retire, and criminals go to the Uplands to escape capture.

The story revolves around one generational family: Klara and her father, followed by Klara’s daughter Gradisil and Gradisil’s husband Paul, and later Gradisil’s two sons, Hope and Sol.

In Part I, it is the year 2059. Klara’s father agrees to hide a woman named Kristin in the Uplands. Kristin murders Klara’s father. Klara has serial lovers and one of her common law husbands fathers Gradisil.

Part II is all about Gradisil, who champions the residents of the Uplands in a mission to become independent. There may have been some forty houses in the Uplands in 2059, but the population keeps growing. America, one of the powers on Earth, seeks to control the Uplands and declares war on the Uplanders. Gradisil leads the Uplanders in a guerilla war and defeats the better-equipped Americans by using suicide bombers which destroy the two main American space bases.

While on her mission to free the Uplands, Gradisil has two children. Each child has a different father, neither of which is Gradisil’s husband, Paul. At the end of Part II, Paul betrays Gradisil and hands her over to the Americans. The Americans use SWAE (“shot while attempting escape”) to remove Gradisil as a rallying point for the Uplanders. Nevertheless, Gradisil’s efforts had already been successful, and the Uplanders are able to create an independent political entity.

In Part III, Gradisil’s sons take revenge on Paul for betraying their
mother.

Early in the book, the author ridicules the American NASA rocket program. Von Braun “developed enormous liquid fuel rockets to shoot men into orbit – can you imagine? That was the only way into orbit in those days – on the apex of these great rockets, like a fairy on top of a Christmas tree. … The waste! My father would shake his head … as if full pity for the idiocy of twentieth-century humanity.” After all, the Uplanders, who were in some part Americans, had their Elemags. Exactly how they worked was not made clear.

I have to criticize a scene with a man falling from space to Earth in a space suit. Even if I could buy that, this man lost a glove and a hand yet the vacuum of space did not suck all the air pressure from the suit. That was certainly more than I could swallow. The fall from space made for an exciting episode, but it was poor science.

One of the oddities of this book concerns spelling. Beginning in Part II, the author decides to eliminate the letter c from words like “packed.” It was disconcerting to have to try to figure out what a word meant. Also the word “what” was changed to “wat.” And I didn’t like the use of words not found in my dictionary such as “tourbillions” (page 270).

One of the problems I had with the book was how the Uplanders were able to live independently in orbit without much apparent expenditure of money. At the beginning of the book, no country had a presence in space nor was there a Moon colony. Later in the book, the Uplanders in their Elemags were able to settle on the Moon. The author gave the Uplanders more capabilities that whole countries. Why wasn’t there an International Space Station or a Moon colony?

The author is a professor of nineteenth-century literature at the University of London. Being English, he didn’t mind denigrating America and Americans. Despite this flaw for American readers, and what I thought were problems with physics, the book held my interest right from the beginning. The author was able to develop his characters into full blown people, making the story exciting. The book made the shortlist for the 2007 Arthur C. Clarke award for best new novel.