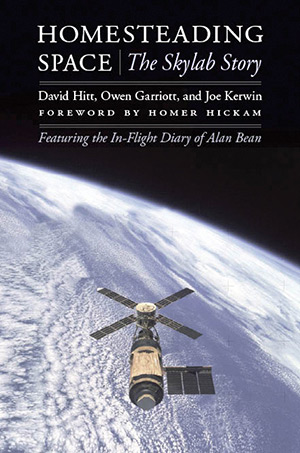 With so much attention paid to Apollo’s Moon missions, the space station Skylab often gets overlooked. Homesteading Space is a welcome addition to the public’s knowledge of America’s first long-term home in space. David Hitt, a NASA education writer at Marshall Space Flight Center, collaborated with Skylab astronauts Owen Garriott and Joe Kerwin and interviewed many others to assemble a remarkable history of the birth, life, and fiery death of this nearly forgotten piece of the Apollo Program.

Skylab was unprecedented for America’s space program, and remains unsurpassed in many ways. For instance, the whole station was lifted into space in one launch. Skylab also featured an interior space large enough for astronauts to run around, perform gymnastics, and even test an early version of the Manned Maneuvering Unit (MMU), a jet pack that allowed astronauts to travel in space without a tether.

Homesteading Space makes an excellent point about Skylab: “While previous U.S. spaceflights were focused on going places, Skylab was about being somewhere, not just passing through the phenomenal space environment, but mastering it.”

Skylab had important lessons to teach, especially about long-duration spaceflight. One surprising fact is that Skylab was built to prepare for a human mission to Mars, which is overlooked today because we did not end up going. Another early lesser-known fact was that NASA considered including artificial gravity in Skylab’s design, but found that a rotating station was more trouble than it was worth.

Three crews performed important solar astronomy work on Skylab between May 1973 and February 1974, using the structure on top of the station that gave it a distinctive “windmill” appearance: the Apollo Telescope Mount. The ATM had a complex control system for its day, requiring as many as 20 separate commands to aim correctly. While the lead scientist had primary responsibility for taking pictures, all the astronauts gained proficiency and even learned to spot “targets of opportunity” when they suspected a solar flare was about to erupt.

The ATM also served a secondary function: It provided power for the station early in the mission until the astronauts could repair the primary solar array, part of which was torn off during launch, along with Skylab’s heat shield. The authors provide some of their best and most entertaining prose describing the “10 days in May” when NASA engineers worked around the clock to develop ways to fix the station. This was Skylab’s “Apollo 13” moment, and some of the scenes described during the rescue planning are hilarious.

More importantly, Homesteading Space provides an excellent oral history of the program, including Alan Bean’s complete journal from the Skylab II mission. While there is a lot of technical talk, much of the story comes from first-person interviews, so Homesteading provides more personal anecdotes to spice up what otherwise could have been a dry technical narrative. David Hitt, the NASA writer who worked with astronauts Garriott and Kerwin, explained that “We wanted to provide the human story of what it was like, day-today, to work on Skylab.” The book grew out of what was originally going to be a short historical Web site piece commemorating Skylab’s 30th anniversary.

The text could have used an index and a few more pictures, especially for some of the EVAs, but none were available: The astronauts were so busy doing the work, they didn’t bring cameras. Fortunately, the authors do a fine job describing in detail what needed to be done and how the astronauts went about doing it.

What Homesteading Space does best is convey the excitement and enthusiasm of the people who worked on the Skylab mission. I hope the book and the mission receive the attention they deserve.