Book Review: How to Find a Habitable Planet 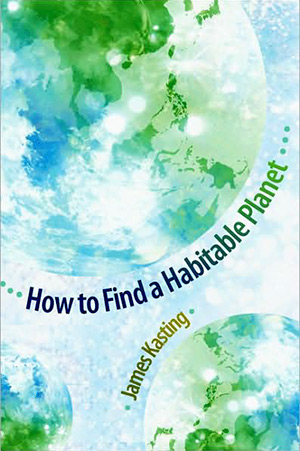 By the end of 2009, astronomers had compiled a list of more than 400 exoplanets: extrasolar planets orbiting other stars. Those distant planets are most likely too big, too gaseous, and too hot to support life, but the very fact that we can now discover these distant worlds means it’s time to start thinking about just how we might identify habitable planets that may be thousands of light years away.

Humanity has been wondering about life on other planets since around 300 B.C., when Greek philosopher Epicurus argued that Earth could not be unique in supporting life. Before we can go searching for those other life forms, however, it would help to have a list of the qualities that make a planet capable of hosting life, or at least life we might recognize from far, far away. Ever pragmatic, Kastings settles for beginning with the qualities that make a planet Earthlike.

First and most obviously, the planet needs to be rocky, rather than a gas giant. Next on the wish list is the existence of water on the planet’s surface. Biologists generally agree that life on Earth began in water, and surface water is much easier to detect from space than water hidden underground. Surface water also implies a climate range like Earth’s, one that’s fairly stable over millions of years, so primitive life has time to evolve into bigger, better, more complex forms.

Stable environments require the planet to occupy an optimal orbit around a stable main sequence star. Scientists call it the Goldilocks Problem: putting a planet at just the right distance from a star so that it gets just the right amount of solar radiation to help it maintain an energy balance. Too much solar radiation will boil off precious surface water; too little, and the fragile world freezes. Additional complexities arise from interlocking environmental feedback loops that control the abundance of ice, water vapor, methane, and carbon dioxide on the planet’s surface and in its atmosphere.

The size of the planet also matters. If it’s very large, it will become a gas giant, a brown dwarf, or hot Jupiter, like so many of the exoplanets found so far. But if it’s not big enough, a rocky planet will cool quickly as it coalesces – so much that its interior freezes and it becomes geologically dead, without vulcanism, or plate tectonics, or a spinning liquid core to make a magnetic field. The magnetic field is necessary to help protect the planet’s surface from dangerous solar and cosmic radiation.

It’s also helpful to have a few other, bigger planets in the solar system. Their gravitational pull can draw incoming comets and asteroids, reducing likelihood of impacts and Cretaceous-style mass extinctions.

So now that we know what we’re looking for, what’s the best way to find these Earth-like planets? After all, we’re looking for objects so small compared to their stars that it’s unlikely we’ll be able to see them directly. Fortunately, astronomers have developed a handful of clever round-about methods for finding small, hard-to-see objects.

Kasting is a distinguished professor of geosciences at Penn State University and an expert in the evolution of planetary atmospheres. He’s also an excellent writer, capable of breaking down complex topics into clear and accessible pieces. That skill makes this first-of-its-kind book not just unique but probably indispensible for students and armchair planetologists. He makes a few suggestions for how to find these exoplanets.

The most successful trick looks for the effects of a hypothetical planet on the light emitted by its star. Astrometry – the measurement of a star’s movement, in this case with infrared interferometry – can reveal wobbles caused by gravitational interaction between the star and its planets; the more massive the planet, the bigger the star’s wobble. Other methods include “transit spectroscopy,” looking for frequency shifts in the star’s spectral absorption lines caused by its light passing through the atmosphere of the orbiting planet; this works best with larger (and probably less Earth-like) worlds such as “hot Jupiters.”

The most exciting method uses gravitational microlensing – the same technique used by cosmologists to study distant galaxies. Here the lensing star passes in front of the source star and magnifies the source star’s light, so its apparent luminosity briefly brightens and then dims back to normal.

These methods all depend on reliable observations, both ground and space based. When the James Webb Space Telescope becomes operational in 2016, our ability to spot and accurately measure infrared signals will improve our chances of spotting exoplanets.