Book Review: How to Make a Spaceship 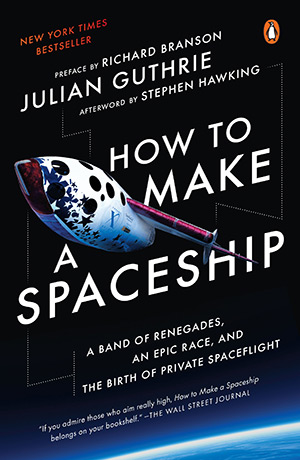 Peter Diamandis is something of a force of nature. He founded Students for the Exploration and Development of Space (SEDS) and the International Space University (ISU) before he had even graduated college. He is a serial entrepreneur whose startups include Space Adventures, Zero Gravity Corporation, Planetary Resources, and Human Longevity Inc.—some he started while he was completing his medical degree. This book is his life story, and the story of the crowning achievement of his life—so far.

Diamandis conceived the X-Prize as a way to stimulate the commercial space passenger industry after reading Charles Lindberg’s “The Spirit of St. Louis,” and thinking about how the aviation industry was jump-started when Lindberg made his New York-to-Paris flight to win the $25,000 Orteig Prize. Why couldn’t prizes do the same thing for space? He started by creating a $10 million dollar prize for the first team to fly to 100 kilometers twice in two weeks, in a vehicle capable of carrying three people.

Guthrie’s book gets off to a rocky start with several errors in the first chapter. Other annoying errors crop up in later chapters. Her worst error has to do with a bit of aviation history. She claims Dick Rutan flew the first nonstop, non-refueled round-the-world flight for nine days at the controls, taking only catnaps. That’s poor service to Rutan’s co-pilot Jeana Yeager, who did a good amount of the piloting.

The strength of the book comes from original material and interviews provided to Guthrie by Diamandis and the rest of the X-Prize cast of characters. At every level, the story is about friendship and mutual trust. It begins with Diamandis’ friendship with Bob Richards and Todd Hawley, fellow students with whom he founded SEDS and ISU. Another important friend for Diamandis was Greg Maryniak, who gave him the Lindberg autobiography as inspiration while he was working on his private pilot’s license, and who later served as executive director of the X-Prize. On the competitors’ side of the story, Guthrie describes the friendship between X-Prize winner Burt Rutan and his chief test pilot, Mike Melvill, and Mike’s friendship with his rival test pilot Brian Binnie. Finally, there is Erik Lindberg, grandson of Charles, who overcame an almost crippling rheumatoid arthritis to recreate his grandfather’s flight and raise money desperately needed to keep the X-Prize afloat.

Burt Rutan’s team got most of the press coverage, but there were 25 other teams competing for the X-Prize and several that built and flew hardware. Video game designer John Carmack turned the iterative testing and improvement lessons of his software experience to building rockets; his prototype made it to 600 feet before it crashed. His experience is a good example of the red tape all the teams had to contend with: at one point there were more FAA officials working on his launch license than he had building his rocket. Argentinian Pablo de Leon, the only competitor from South America, built a capsule and drop tested it from 90,000 feet, but couldn’t get his launcher built. Steve Bennett was the first competitor to launch; his Nova 1 was the largest nongovernmental rocket ever launched in the United Kingdom, and made it to 10,000 feet. Dumitru Popescu was a Romanian aerospace engineering student who quit college to compete. His first rocket motor blew up on his home-made test stand and earned him a trip to the local police station. His next rocket made it to 4,000 feet, and could have flown much higher but for adverse weather.

Ultimately, Rutan was the only competitor who had a patron with deep enough pockets to make it to the finish line. Even though Rutan is a certifiable genius with six airplanes hanging in the Smithsonian National Air and Space Museum, without the $26 million poured into his company by Microsoft co-founder Paul Allen, he could never have built Spaceship One before the time limit on the X-Prize expired in 2004. He made it, barely.

Passion is a much overused word these days, but it’s tough to find a better one to describe the force driving these characters. It’s the intense emotional propulsion of Diamandis and the people surrounding him that makes them such attractive personalities. This book allows the reader to feel their exaltation in successes and depression in (temporary) defeats. But this story isn’t just about the love these people have for space; it’s about the love they have for each other. By the time you close the book, in which a seemingly endless succession of immovable objects has yielded to the irresistible force of their determination to make something happen, you’ll love them, too.