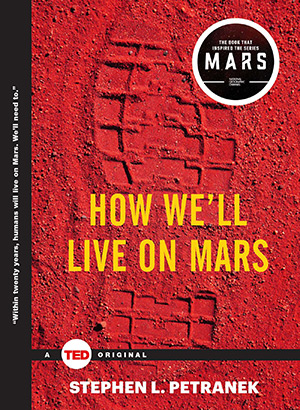 This short book is based on a TED talk by the author, Stephen L. Petranek, who is the former editor of Discover magazine and a current editor of Breakthrough Technology Alert.

The book opens with a prediction: in 2027, humans will land on Mars via privately-owned spacecraft.

The author bases this prediction mostly on his belief that Elon Musk, the CEO of SpaceX, will make good on his plans to settle Mars. He begins by looking back at a previous generation’s rocket man with a “crazy” vision: Werner von Braun, the father of the Saturn V that took men to the Moon. The author lauds von Braun’s 1948 The Mars Project

and then proceeds to show in the next few chapters how it might actually be accomplished.

He reviews Zubrin’s Mars Direct which proposes to send cargo ahead and utilize Martian resources to reduce mass from Earth. He then briefly describes the Mars One (one way) plan and Dennis Tito’s Inspiration Mars that would send a married couple on a flyby to Mars in 2021. These plans show that humans already know how to get to Mars, and that people want to go, though a long list of failed missions emphasizes the fact that it is not going to be easy.

The major challenges of isolation, cost, safety, health risks, and radiation that a trip to Mars entails are listed in Chapter 4 with a paragraph or two on how these challenges are being addressed.

According to Petranek, Elon Musk will take us to Mars using his “colonizer” ships that are to be twice as powerful as Saturn Vs and will transport 80,000 people to Mars between 2030 and 2050—for a cost of about $500,000 per person.

How we will actually live on Mars is summarized in Chapter 6. The author optimistically assumes that technologies for extracting water and oxygen from Mars will be quickly developed and deployed, with one example being the Mars Oxygen In-Situ Resource Utilization Experiment (MOXIE), planned for a future NASA rover.

The selection of color photos inserted between chapters 6 and 7 is nice, but the grandeur of these images suffers from being reduced to fit on the narrow 5×7-inch pages.

Terraforming Mars is the subject of Chapter 7. The usual methods for warming and changing the atmosphere from giant mirrors to melt the south pole and bacteria to produce oxygen will not be news to anyone who has read Zubrin’s Case For Mars.

The author concedes that Mars settlers will not emigrate for economic reasons, but some means of paying for Earth imports will be required for a settlement to be sustained. He quotes Musk saying that the primary export of Mars will be intellectual property. The author suggests that materials that are becoming scarce on Earth, such as nickel and cobalt, may be mined from the asteroids, and then processed in factories on Mars.

“Once a Mars base is reasonably functional, people will flock there,” Petranek argues (p73). He supports this prediction with historical migration data from the settlement of the Americas by Europeans, noting that Jamestown started with 104 settlers in 1607, was reduced to 35 in a year, but the population of Virginia rebounded to 1400 by 1622, and 30,000 by 1640.

He concludes with “Mars will become the new frontier, the new hope, and the new destiny for millions of earthlings who will do almost anything to seize the opportunities waiting on the Red Planet.” If Petranek is right, humans will walk on Mars in 2027.