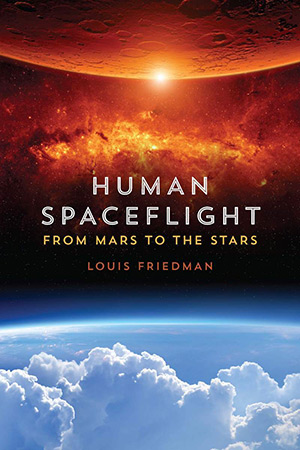 Human Spaceflight by planetary scientist and former executive director of the Planetary Society Louis Friedman is actually two books in one. The first book consists of chapters 2-6 and is an excellent review of solar sail technology and experiments.  Chapter 6 “A Mission to the Solar Gravitational Lens Focus” was especially exciting and new to me.  In this proposal, a solar sail is used to boost a telescope so far out that it can use the entire sun as a gravity lens to provide enormous magnification levels.  Friedman should be applauded for his advocacy of such missions, and his useful history of past solar sail experiments, including those sponsored by the Planetary Society.  The only flaw in this part of the book may be Friedman’s failure to provide more technical specifics about technologies such as ion drives that might be viewed as competitors to solar sails so that the reader can better understand why Friedman is so enthusiastic about solar sailing.

The second book, which includes chapter 1 and chapters 7-10, promulgates Friedman’s view that humans ought to settle Mars but go no further in space in person. This is based on a curious cognitive dissonance that:

Neither of these ideas are complete thoughts but Friedman deserves credit for making his case.  Friedman’s vision of a super-robotic future stops short of a Singularity or downloading.  Although Friedman is certainly right that we can expect rapid advances in artificial intelligence, it seems hard to believe that these advances will suffice to satisfy the human need for exploration as speed-of-light limitations grow.  I can imagine that we could put enough robots on, say, Europa, to the point that no one feels the need to land human explorers there.  Over time, the same level of virtual exploration might be extended throughout the solar system.  However, it seems inconceivable that the same type of virtual exploration would be very satisfying when expanded to the interstellar stage due to speed of light limitations.

Friedman does not seem to appreciate that a single “backup” copy of the human race is a thin reed on which to base long-term human survival.  As I have argued elsewhere, human dispersion throughout the solar system and into the Kuiper Belt and Oort Cloud seems required, and for some dangers only large scale interstellar settlement will suffice.  Friedman envisions the construction of space mega-projects like a 10 km by 10 km solar array to power an immense space-based laser for interstellar solar sailing without seeming to grasp that this level of technology will also enable human settlements everywhere in the solar system.

Freidman is understandably suspicious of space entrepreneurs.  On page 38 he discusses the failures of Peter Diamandis’ lunar landing effort “Blastoff!”  A few pages later the crash of the first flight of Falcon 1 results in the loss of an experimental solar sail.  On page 101 Friedman recounts the failures of commercial Halley’s comet missions to get off the ground.  A review of booster technology on page 101 fails to mention either Vulcan or Falcon Heavy, and even the Falcon 9, which is very odd for a 2015 book!  A review of SpaceX’s interest in Mars does mention the Falcon 9 and Red Dragon only to dismiss them.  Friedman seems uninformed about SpaceX projects like the Raptor engine or the Mars Colonial Transport.  Friedman believes strongly that “space is for government” and seems blind (although perhaps with good reason) to the potential of space development to support space settlement.

Friedman now and then indulges in hyperbolic overgeneralization with regard to technical matters he does not take seriously. On page 16 he refers to advocates of “limitless” nuclear energy as though any engineer or scientist seriously thinks any energy source is “limitless.”  A few pages later (pg. 18) Friedman has “no idea” how to make anti-matter rockets work, although many papers have been written on the topic, in part funded by the Air Force.  As best I recall, the main issue with anti-matter rockets is the cost of producing the anti-matter, not a lack of ideas on how to manage anti-matter, which is done every day at particle accelerators.

Friedman has been unfairly criticized as opposing all human exploration of Mars.  Far from this, he strongly advocates humans on Mars both to explore and also to settle.  Friedman discusses the prospects for life on Mars, and concludes that we can never prove there is no life on Mars, so this should not impede our exploration and settlement efforts.

Human Spaceflight is interesting and worth reading, although I think in the long run it will be viewed as conservative with regard to the prospects for large scale space development and settlement.  Having said this, I expect that Friedman’s advocacy of Mars settlements will put him on the right side of history in at least this one respect.