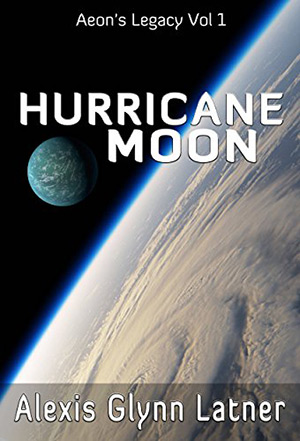 With civilization rapidly running aground, the hopes and dreams of humanity ride with ten thousand colonists frozen in a ship sent to settle an extra-solar planet.

Hurricane Moon by Alexis Glynn Latner explores many of the social, medical, moral, and astronomical issues that may face humans intent on making a new home for themselves among the stars. The book opens with the crew in the midst of final preparations for their estimated 300-year journey. The main character is the ship’s doctor, Catharin, who approves a last-minute addition to the passengers—a noted but controversial genius in biology, Joseph Devreze.

Upon arrival in the target system, the crew discovers that the planet they planned to settle has lost its moon and had its orbit changed by a close encounter with a pair of white dwarf stars. With no other nearby prospects, they opt to re-enter stasis and proceed toward the galactic center where candidate planets are presumably more abundant. The search takes far longer than anticipated, but the chosen planet Green, already awash with life, seems ideal.

Catharin soon discovers that the extra-long time in stasis has compromised their chances for survival, and that she must depend on Joseph’s illegal experience in manipulating human genes to save her dearest friends, the colony’s first child, and her dream of building a new life on the new world. Unfortunately, the moody Joe is angry that he has apparently been revived to perform what he considers menial medical work instead of pursuing his dream of creating new creatures for a new world. Tensions increase after Joseph is injured by a shuttle crash and quarantined by Catharin at the primitive base on Green. The crash brings a realization that the planet’s stormy moon (hence the title) has profound psychological effects on the would-be colonists.

Space enthusiasts are sure to appreciate the detailed descriptions of the workings of the starship, the explanations of astronomical phenomena, and the imaginative alien environment created by the author. I was quite impressed with the author’s world-building skills, especially considering this is her first book!

I did question the crew’s rejection of the first extra-solar planet on the basis that it had no moon. On page 34, it says “Without a moon, there would never be seasons here. There would be no Spring.” When I read this, I thought it must be wrong. Seasons are the result of axial tilt and/or elliptical orbits, and have nothing to do with moons. Or do they? The Giant Impact Theory states that our moon was formed as the result of a collision. That same collision supposedly “knocked the Earth over” and caused the axial tilt that is responsible for the seasons. So perhaps there is a correlation between large moons and planets with seasons. However, there is debate among planetary scientists about whether or not the Earth’s tilt has been stable, and thus whether a moon makes a difference to a stable climate. Some say that glaciers, like putting a weight on one side of a spinning top, drastically changed the tilt, and it used to be around 50 degrees. Regardless, the author is within bounds to speculate that future scientists have decided that a moon provides long-term stability even if it doesn’t cause the seasons. The crew’s decision to look for a world with a moon is reasonable. Besides, moons are just cool!

The proposed way that the first world lost its moon, however, did not seem plausible to me—that some errant white dwarfs swung through the system and stole it, leaving the planet intact. White dwarfs are very hot—I’d expect if one, let alone two, came close enough to capture/vaporize our moon, the Earth would be destroyed. The people who targeted this world and its moon in the first place must have been extremely careless to risk 10,000 people by sending them to a system without first plotting the trajectories of nearby stars. But then people, especially in large organizations, do have a habit of overlooking the obvious!

I am not a biologist or a doctor, so I don’t know how realistic the stasis effects and various interactions with the alien environment are. I know that I enjoyed the character reactions and interactions (especially the romance!) in dealing with the challenges, and was satisfied with the conclusion.

This book is for adults and contains some foul language and adult sexual situations, though nothing graphic. The main characters are somewhat anti-religious, but I doubt any one can take offense at the way the author “preaches” tolerance and acceptance of different religious beliefs and customs.

For those of us entertained by contemplating starship designs, planetary choice criteria, and biological considerations, this book has it all. But the book is also a great read for those who enjoy science fiction about people making choices based on the kind of world and future they want to build for themselves. What kind of people will sign up for a one-way trip to an unknown world? What sort of challenges will they face? Will they be willing to change their plans, their minds, even their own humanity to survive beyond the stars? I highly recommend Hurricane Moon to anyone who wants to imagine life on another world. I look forward to more books by this very talented new author!