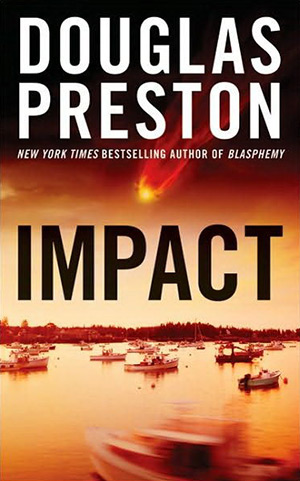 Impact by Douglas Preston is not a disaster novel. It is a clever book focused on the combined impact to society of the choices that three very different individuals make when faced with unique opportunities and situations revolving around a mysterious meteorite impact.

The reader is first thrust into the life of Abbey, a young black college dropout with an interest in astronomy who serendipitously photographs a meteor streaking across the Maine sky. The media report that the meteorite landed in the ocean, but Abbey uses her photo and meteorological data to determine it must have instead landed on one of a string of offshore islands. Abbey’s choice to secretly borrow her father’s lobster boat to search the islands so she can find and sell the meteorite, has disastrous consequences for her, and nearly for the rest of us who are thus deprived of knowledge that could save us.

Meanwhile, former CIA agent Ford (a character from Preston’s previous book, Blasphemy) accepts a secret mission to Cambodia to locate the origin of some radioactive gemstones. I anticipated that Ford would discover an impact crater, and indeed he does. But Ford’s unwillingness to ignore the plight of some innocent locals endangers his life and, more importantly, his mission—which unknown to him, puts all of us at risk.

The third character is a somewhat stereotypical geeky scientist at a facility that is an obvious parallel to JPL. Dr. Corso is contentedly contemplating his new promotion when he receives classified Mars data mailed to him by his former professor who was fired from the facility and then killed in an apparent robbery the week before. Rather than returning the data to the facility, Corso secretly uses it to make an astonishing discovery — that there is possibly a black hole “eating” Mars and thus producing gamma rays. His superiors deride and dismiss his presentation, and he is subsequently fired. Corso’s need for revenge for his selfish behavior (in my opinion!) and subsequent disgrace leads to his own personal ruin and almost the ruin of the entire human race.

The three stories intersect in a logical way in part two of the book and lead to a fast-paced and satisfying conclusion that just pleads for the big screen.

Dialog, descriptions, and settings all contain authentic touches that reflect the author’s background. Like Abbey, Preston lives in Maine and took a smorgasbord of science courses (before getting his degree in English literature). Like Ford, he traveled to Cambodia (as part of an archeological expedition that included scientists from JPL). These personal experiences result in descriptions akin to verbal critter-cams mounted on the characters. One secondary (villainous) character was portrayed so realistically that reading from his viewpoint (including frequent cursing) made me physically uncomfortable.

Readers expect fictional future science to be speculative. However, the author may have done better to leave some of the details fuzzy rather than invent scientific “explanations” that stretch the definition of plausible such as: the synthetic (as in must be manufactured) white radioactive element Americium ends up in amber gemstones; a scientist suggests a black hole is eating Mars and producing gamma rays; and a weapon can somehow store/create/accelerate strange matter without turning anything else into strange matter or changing its position in space. However, these speculations are at least consistent with a mysterious meteorite, and can be forgiven in the long tradition of techno-babble.

But one gaffe in chapter one threw me completely out of the story because it was so obviously wrong. Abbey, who supposedly studied astronomy at Princeton, points her telescope at Orion’s sword and informs her friend that she is photographing the Andromeda galaxy! The Andromeda galaxy is in the constellation Andromeda which is in a different part of the sky from Orion. Also, the photo is taken on April 14 at 9:44 PM in Maine and supposedly captures the meteor trail over the ocean (which is to the southeast). Orion is a winter constellation which hugs the western horizon in April and is probably no longer visible that time of night. Andromeda in April is low in the north. A substitute might be to have Abbey photograph galaxies (M65, M66, M95, and M96) in the constellation Leo. I hope some correction is made before Impact goes into a second printing, or the book is made into a movie.

Impact would make one blockbuster of a movie. But will you wait and let Hollywood choose which parts of the story to cut or embellish to fit their format, or will you investigate Impact in its pristine book format? The choice is yours, and who knows what impact that small decision may have on you and the rest of us! However, I recommend you let your life be interrupted long enough to experience the full story.