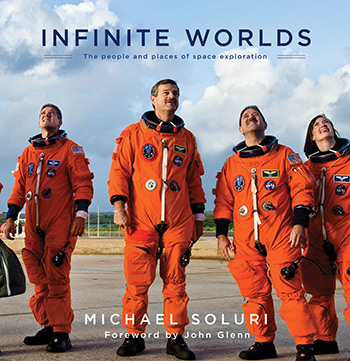 It is rare that we get a glimpse of the inner workings of the thousands of men and women who made the space shuttle missions a historic monument to space innovation. Author and photographer Michael Soluri does just that after spending years following the development and execution of the fifth and final mission to service the Hubble Space Telescope. Through a series of hundreds of stunning photographs and 18 first-hand essays from the astronauts, engineers, and technicians of the Shuttle Atlantis STS-125, Soluri provides a detailed look at this final flight to Hubble and what it takes for humans to work in space.

This coffee table-sized book is divided into a foreword by John Glenn, a unique prologue, and four chapters. The prologue, called Transcendence in Time and Distance, juxtaposes spectacular full-page images of distant star clusters with beautiful images from Earth’s history at the time that light left those far-flung objects. As an example, one left-hand page shows a globular cluster 40,000 light years away and is paired on the right-hand page with a close-up of a Neanderthal cave painting. The final page of the prologue is a gorgeous photo of the lunar module on the Moon with Neil Armstrong’s shadow stretching toward it.

Chapter 1, entitled On Earth, comprises approximately one third of the book, with the focus on preparations for the Hubble servicing mission. Commander Scott “Scooter” Altman and Mike “Mass” Massimino contribute essays as well as Deputy Associate Director Frank “Cepi” Cepollini. Cepi’s essay reveals that he was thought to be nuts when he suggested using the space shuttle to perform satellite servicing back in the 1970s. But, that very servicing was destined to become one of the highlights of the shuttle program.

The final Hubble repair mission resulted in an additional 180 uniquely designed crew aids and tools (CATs), as described in the essays by Jill McGuire and Justin Cassidy. The reader is treated to 10 close-ups of these CATs, including the Power Grip Tool and Mini Power Drill Tool. The essay by extravehicular activity (EVA) manager Mark Jarosz discusses the details of training with these tools inside the giant pool called the Neutral Buoyancy Lab (NBL). Typical training sessions lasted six and a half hours, not including set up and debriefs, and went on for more than two years until all five of the EVAs were scripted to the minute. The book includes many candid photos of the astronauts prepping and entering the NBL.

The second chapter, called On Orbit Around Earth, takes the reader pictorially through the launch preparation and includes essays from technicians such as René Arriëns, the Orbiter vehicle crew chief responsible for the White Room where astronauts are aided in boarding their vessel. Then in his essay entitled The Ultimate Gut Check, Launch Director Michael Leinbach provides perspective on the responsibility of giving the “Go” for launch where 20,000 parameters need to be within specification ranges. The chapter also includes essays by two of the Hubble mission specialists as well as an essay by the lead EVA officer at mission control.

The most traditional coffee table pages come in Chapter 3, On Capturing Ancient Light. Here, the reader is presented with amazing full-page images taken by the Hubble. The essay by the Hubble Senior Project Scientist David Leckrone, who has worked on the telescope since 1976, provides much history on the Hubble’s accomplishments, as well as a discussion about the future James Webb Space Telescope.

The final chapter, On the End of One Era and the Beginning of the Next, provides close-up images of many of the marks left behind by workers, such as “STS-135 Final Wheel Stop” painted on the runway, and chalk circles denoting repair sections in the flame trenches under the shuttle launch pads.

Readers might be disappointed if they treat this book as a simple but splendid photo album of the final Hubble repair mission. A number of pictures are not labeled, and their significance does not come alive until reading the essays. The reader slowly feels as if he or she could also be included in the photo of the 7,350 worker signatures on a concrete wall. Many of the book’s essays include the humble beginnings of the writers and their amazement at being part of such a historic project. Small vignettes take the reader inside the work, such as tile repair technicians whistling the song “If I Only Had a Brain” from the Wizard of Oz while working. And in a final epilogue essay, the author Soluri includes his discussion with Neil Armstrong about the six shadow photographs Armstrong took on the Moon, referring back to the photo in the prologue. As a final tribute to the workers, Soluri concludes with, “Their work, signatures, shadows and reflections are the most eloquent evidence of mankind in space.”