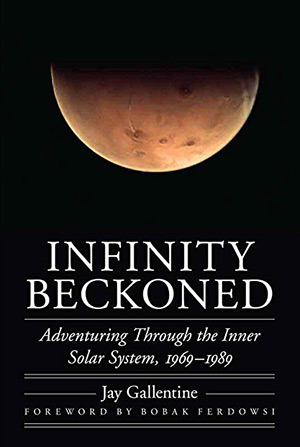 Infinity Beckoned: Adventuring Through the Inner Solar System, 1969-1989 is an amazingly detailed behind-the-scenes account of both Soviet and American unmanned space programs targeting the Moon, Mars, and Venus. Readers get the sense of being virtually present at all the events. Jay Gallentine’s interviews with key participants clearly went well beyond the basics of what happened and delved into the how and why of what happened, as well as the mannerisms, attitudes, and emotions of the people involved.

Chapter discussions alternate between American and Soviet programs that were being developed about the same time. The Viking orbiters and landers dominate the American portions of the book. In particular, the competition for developing equipment and procedures to look for evidence of life on Mars is laid bare. The technical challenges of designing, building, and testing that equipment are explained through the day-to-day work of their inventors. Having been thoroughly exposed to the development of the instruments, readers are right there with the scientists and engineers as they wait to see if the landers will work successfully on the Martian surface.

Descriptions of the Soviet probes to the Moon, Venus, and Mars are even more extensive. Gallentine provides telling details of life behind the Iron Curtain as well as the science and engineering failures and triumphs of those programs. They range from the bureaucratic frustration of being unable to get a photocopy machine (“Just imagine: What if someone reproduced a secret document?”) to the decision to launch four probes to Mars even though they were known to be doomed by rapidly deteriorating electronic components (“They had to get to Mars before Viking. Upstage America in any way possible. Replacing all those gobs of chicklets [tiny parts] would kill the chance.”)

That brings us to Gallentine’s writing style. Reading this book is like talking with a buddy over beers. The author pulls no punches, softens no characterizations, tells it like it was. “Korolov maneuvered his flabby gut from the chair.” A technician “looked like he’d just come from seeing Kiss on the Destroyer Tour.” Gallentine describes the excitement of American geologists when they realized the Mars lander could move rocks and reveal “dirt that had not spent the last hundred-million-odd years basking in the destructive glow of ultraviolet light. Virgin soil: the crack cocaine of Mars exploration.”

Although much of the book describes parallel efforts of Soviet and American scientists and technicians, it also includes a few episodes of cooperation between the two countries. One example was the delicate diplomacy involved in ensuring that signals from the Soviet Luna 15 vehicle would not interfere with the Apollo 11 Moon landing. Luna 15 was launched a few days before Apollo 11, and was orbiting the Moon when the Americans landed there. Another example was the Soviet program to send Vega landers to Venus in 1985. France acted as a go-between to arrange for the United States to help track the vehicles’ descent onto the planet’s surface. Tension was palpable when Soviet and American scientists first gathered to discuss the mission in September 1983, shortly after Soviet fighter jets had shot down a Korean airliner. The U.S. State Department ordered the Americans not to meet with the Soviets. “Accordingly, the Yanks took one floor of offices and conference rooms, while the Reds had another,” Gallentine writes. “[French intermediary] Jacques was shuttling in between.”

Infinity Beckoned is a fun read, a rare revelation of space scientists’ lives in the Soviet Union, a candid account of the intricacies of individual interactions during the Cold War, and an unusually personal description of what it takes to develop instruments and get them to other planets.