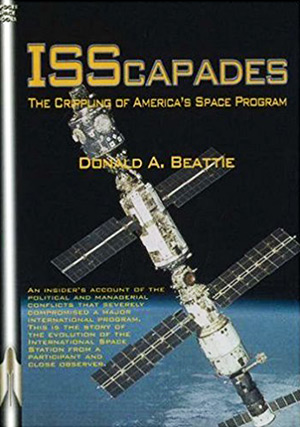 To know and understand where you are it is important to know where you started from and what path you have taken to arrive at your destination.

With respect to the International Space Station (ISS), the book ISScapades by Donald Beattie does an admirable job of providing the reader with a reasonably detailed overview of why we have the space station we have. ISScapades covers the history of the space station program starting in 1982 with the first NASA internal studies through 1998 with the launch of the first elements. A final chapter provides highlights for each of the years 1999 – 2005.

Donald A. Beattie, the book’s author, is a former senior manager at NASA who initially worked on the Apollo program and rose to become the NASA Headquarters program manager for Lunar Surface Experiments. Relevant to the writing of this book, Beattie served on the Space Station Advisory Committee from 1987 to 1994. He has previously authored History and Overview of Solar Heat Technologies and Taking Science to the Moon.

The chapters of ISScapades are arranged chronologically and are delineated by significant program phases. The book opens with a brief overview of the birth of the space station program with the 1982 Space Station Task Force. The task force was created by then NASA Administrator James Beggs who was appointed to the position in 1981 by President Reagan. It was almost another two years before the program received a very public “go ahead” in President Reagan’s 1984 State of the Union Address.

Beattie makes clear the efforts that NASA had to undertake in order to sell the program, especially to the scientific community whose political support was deemed necessary. NASA also approached other nations about the possibility of their participation in the program as a way of building political support for the approval process.

In addition to identifying the functions the space station would fulfill, an architecture for the station itself had to be identified. Six competing “geometries” were identified from which one had to be chosen. Decisions also had to be made between developing new technologies versus using existing “off-the-shelf” technologies. Obviously risk and cost were important factors in the decision making process.

Beattie makes clear the difficulties encountered by a government agency undertaking a large project: program administration, management, design, and operation all done by a committee of committees with each committee having its own agenda. The committees in this case are the individual NASA centers, the Executive Branch and the OMB (Office of Management and Budget), and Congress and it’s relevant committees and subcommittees. NASA had to contend with the OMB and Congress and with the internal competition between centers while designing the station program, assigning ownership of work packages, and in setting up the necessary management structure.

From day one NASA encountered problems with the program’s budget. For the FY 1985 budget, OMB had approved $225 million, but Congress cut that back to $150 million. It is clear that the space station program was off to a rocky political start when Beattie states that with “the first budget submission, the die was cast that would lead NASA and space station supporters down a long, tortuous path of reduced capability, missed milestones, and cost overruns.” For FY 1988, NASA requested $1.055 billion for the space station program. This was cut by OMB to $767 million and was subsequently cut again by Congress to just $393 million. According to Beattie: “There could be no further pretense. The space station program was being driven by just one consideration: cost.” Originally, first element launch was set for 1991 with the station having achieved initial operational capability by the end of 1991. That initial schedule was impossible to maintain given budgetary realities and the politically driven redesigns.

Beattie does not just cover the organizational, budgetary, and political aspects of the program. He also covers related space events, studies, commissions, and other space projects to place the various stages of the space station program into proper context. For example, Beattie brings to the reader’s attention the intimate relationship between the space station and the space shuttle program. From the book: “…NASA was still in the throes of justifying the high cost of the shuttle fleet’s development and operations. Management argued that these costs would be easily amortized and reduced over a period of many years predicated on the need and ability to fly thirty or more flights per year.” Hence the program’s reliance on the shuttle. The 1986 Challenger accident and subsequent 32 months of grounding showed the danger of relying solely on a single class of launch vehicle. Of course, alternate launch vehicles for assembly and logistics failed to materialize due to an inability to obtain the necessary funding for these projects.

Beattie also presents interesting hardware aspects when germane to the issues being discussed. Take for example the payload capacity of the space shuttle. Prior to the Challenger accident, the published maximum weight for shuttle payloads was 65,000 pounds to a low earth orbit (LEO) with an inclination of 28.5 degrees. However, the shuttle would not be able to deliver payloads of this weight to the specific LEO orbit selected for the space station as its orbital altitude of 220 nautical miles was higher than the nominal LEO orbit.

This, combined with shuttle changes recommended in the wake of the Challenger accident, meant that for short duration missions the shuttle could only deliver 46,000 pound payloads to the station’s 220 nautical mile orbit. For longer duration missions involving docking and EVA, the maximum payload was reduced by another 3,500 pounds. And the maximum payloads were even less for Columbia, which was the heaviest of the orbiters. All these factors had to be taken into account in the design and assembly of the space station as they had a direct impact on the required number of assembly and logistics flights, which affected scheduling and program cost.

With respect to NASA’s ongoing budgetary battles, Beattie describes a study conducted by the American Institute of Aeronautics and Astronautics: “One chart included in the AIAA Assessment showed a comparison of federal agency outlays from 1965 to 1985. Of all the agencies, several showing growth of 354% to 1771%, only NASA’s outlays were negative by 54%.”

The book’s most provocative, and most important, chapter is its last wherein the author offers an insightful critique of the political triad of NASA, OMB, and Congress. Titled “Who Was in Charge? – No One!”, Beattie’s broad analysis should be considered “must reading.”

Despite being confronted with a bewildering array of studies, commissions, committees, task forces, players, and facts, ISScapades is a readable account of the serpentine history of the International Space Station program. If you want to understand why the International Space Station is what it is today, then read this book. I have read several books on the subject and this is one I can recommend.