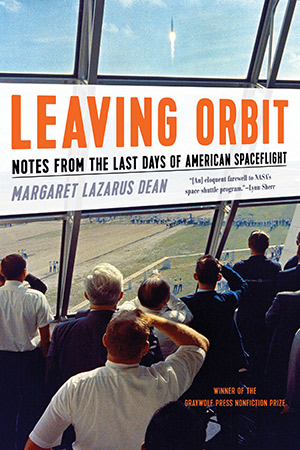 “What does it mean that we went to space for 50 years, and then decided not to anymore?…What does it mean to stop exploring?” These questions haunt Margaret Lazarus Dean (also author of Challenger disaster-themed novel The Time It Takes to Fall), and drive her quest for answers. Leaving Orbit: Notes from the Last Days of American Space Flight is a provocative look at the U.S. space program and how it shaped a handful of generations.

Dean’s love affair with space began, as it did for many who grew up between Apollo and the space shuttle, with childhood visits to the Smithsonian’s Air and Space Museum. There, she saw the story of NASA’s “heroic” era, illustrated by suits and space capsules and Moon rocks, told with images of U.S. astronauts in action. Meanwhile, NASA was moving forward with the shuttle program, training a new batch of astronauts, including women as well as men. Now every kid could dream of becoming a spacefarer.

Dean intertwines the history of American spaceflight with the firsthand accounts of NASA missions by “New Journalism” writers like Tom Wolfe and Norman Mailer, and with Dean’s own experiences, from meeting legendary figures like Buzz Aldrin, to Kennedy Space Center orbital integrity clerk and kindred spirit Omar Izquierdo, to her own witnessing of the final three shuttle launches.

“It can’t be a coincidence that the 60s era of creative nonfiction overlaps so perfectly with the heroic era of spaceflight, the big egotistical voices turning journalism inside out at the same time the innovators in Houston and Huntsville and the Cape were redefining what machines were capable of, what human beings were capable of,” Dean muses. Her own voice is neither big nor egotistical, but the words and imagery she wields are no less effective, and more visceral.

Her joy is palpable when she describes shaking hands with Buzz Aldrin—“I am touching a Moon hand”—and watching him sign Buzz Lightyear action figures for an endless queue of fans of all ages. We can mirror her “patriotic rage” at the idiocy of lunar doubters who believe the Moon landings were a hoax, and admire the hope of today’s astronauts-in-training who know they’ll wait years and still may never get to space.

Dean deftly delivers the “unphotographable enormousness” of the cavernous VAB (Vehicle Assembly Building) and the painful throat-catch at the empty spaces “discolored from the touch of people’s hands” among the displayed mission patches on the lobby wall of the Kennedy Space Center’s Launch Control Building, memorializing the unfinished missions of Challenger and Columbia. She captures the camaraderie of the space fans who line the narrow Merrit Island road to cheer liftoff: a mix of “tax and spend liberals, Tea Partiers, hippie peaceniks, libertarians, military loyalists,” all united by their love of human spaceflight, and their need, like Dean, “to feel the light of the launch against my own face, its vibration pushing against my clothes.”

Dean closes with two images. The first: space shuttle Discovery taking its place as an exhibit at the Air and Space Museum, to be marveled at, even as it’s covered with dust. The second: Space X’s Dragon mission launching from the Kennedy Space Center, where Dean can’t help but feel, “They are using the wrong language, are doing everything wrong.”

Robot explorers and probes continue to explore space for NASA, but human spaceflight is now in the hands of private industry. Dean’s book—part elegy, part history—captures the end of an era whose dreams are now dependent on CEOs, rather than a national vision. Dean reminds us there is a difference, and the difference matters.

Charlene Brusso is a freelance science writer based outside Syracuse, New York.