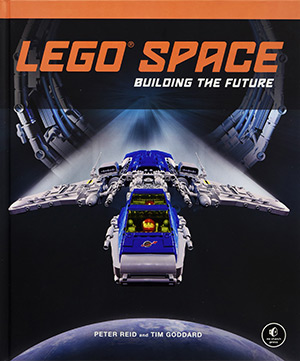 I have to admit that this book was an unexpected surprise. My expectation was to receive a book that simply illustrated how to build various space related objects using LEGO® bricks. Instead, the book is a beautifully illustrated science fiction story about humanity exploring and working in space. There are multiple two-page spreads depicting future scenarios such as space stations, moon bases and spaceships, all created using LEGO blocks. As the story unfolds, there are many elements which add to the realism. Any child reading this book will learn about the various types of future jobs in space, as well as the ships, hoppers, transports, rovers, robots and even exo-suits that might be necessary for a working base. Each object includes a detailed description of how it is used with pictures showing it from multiple angles.

Although this book is not authorized or endorsed by the LEGO Group, all building instructions are in the same format as what LEGO would normally produce.

The story begins with Sputnik at the dawn of the space age. It then quickly moves through a succession of space exploration events, including LEGO images depicting Armstrong’s footprint on the Moon and flag planting, the Voyager grand tour of the planets, and the Opportunity rover on Mars. Interested readers are provided the instructions for building their own Sputnik model.

The story then depicts a possible next stage in mankind’s space exploration with details of a Moon Base, the mining of Helium-3 for energy generation on Earth, and the usage of the base as a launch pad for establishing a colony on Mars. The little LEGO spacemen soon create a peaceful Federation on Earth, and move on to establish a space station in orbit around Jupiter called Krysto Station. This base is then used to establish another outpost on Saturn’s moon Hyperion.

The book explains the importance and required training for various jobs in space, including pilots, ground crews and Inhospitable Climate Engineers (ICE). They are also treated to a variety of robots and spaceships designed for different functions. Children will also learn that space can be inhospitable, as there is a disastrous malfunction which strikes the Hyperion base due to a malfunctioning maintenance robot. All hands are lost at the base because of the time it takes for emergency signals to reach the other bases and the long travel times between the planets. The spacemen are undaunted, however, and continue their explorations.

The story takes a dark turn as climate engineers sent on a terraforming mission to Jupiter’s moon Ganymede discover life, which are similar to large ‘worms’ and which contaminate the engineers with radiation. The crew is sent to Earth in medical pods for treatment. Unfortunately, the worms are also telepathic and malicious — they influence the base commander, Admiral Kazak, to recruit others, steal a ship and rename it the Tyrant. The rebels sabotage the Ganymede base, and head to the abandoned base on Hyperion. The outcasts become space pirates who raid the outer planet supply and exploration ships. They also perform nefarious medical experiments, resulting in evil human-worm hybrids.

One of the stated benefits of space exploration is as a wonderful place to stimulate the development of new technologies. Sure enough, in this story, the Moon scientists create advanced artificial intelligence for their robots, resulting in an offshoot of personalized robot servants and companions on Earth. The Moon base scientists even discover the secret to faster than light travel and build a ‘star gate’ to send an expedition to Altair. There, the third planet from the sun is christened Panduro and is perfect for human occupation once the atmosphere is terraformed. A colony is established, and the story appropriately concludes “with so many people living on the distant planet, the future of mankind is assured.”

Interspersed in the story are the instructions for creating some of the depicted models. In total, the book included ten sets of LEGO instructions, comprising a total of thirty pages of directions. Every construction carefully includes a legend at the top of each page with the type and quantity of LEGO bricks required. The models with instructions include Sputnik, three spaceships, four robots, a computer terminal and a Ganymede ‘worm.’ The only negative that could be said for this book is that the models with instructions are all on the smallish side, with instructions typically comprising three to five pages. However, masters of LEGO building will no doubt find much inspiration for building their own models based on the detailed images in the book.

For children and others interested in the future of space exploration, there is much here that dovetails with the National Space Society vision of living and working in space. Not only are there detailed explanations of the functions of ships and equipment, but also the jobs and activities of the explorers and colonists. All of this is wrapped in an adventurous fictional story depicted in beautifully detailed LEGO models.