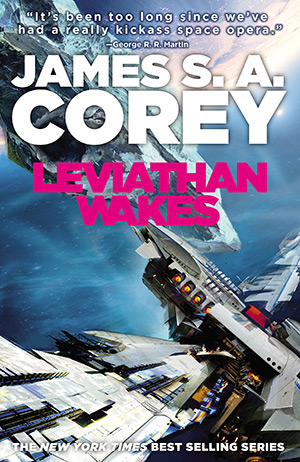 Leviathan Wakes is Book 1 of the book series “The Expanse” and also the basis for the first season of The Expanse, a made-for-TV series on the Syfy channel debuting December 15, 2015.

If you enjoy science fiction blended from generous portions of good science, colorful characters, intense action, mysteries to be solved, pulp fiction clichés, and spooky first contact this may be a book for you.

I found this story intriguing in structure as well as content. It is divided into 55 chapters with the odd numbers titled “Holden” and the even “Miller.” Holden and Miller are two very different protagonists whose parallel stories merge a little before mid-novel.

One strong appeal of the book is the treatment of advanced human expansion throughout the inner solar system and the moons of Jupiter and Saturn. Earth and Mars have become the centers of power and politics for the solar system, and they are in constant conflict with each other and the anarchists and libertarians who populate the asteroid belt. The belt residents do not take kindly to being told what to do or how to live, an attitude likely to endure wherever humanity chooses to expand.

Compensating nicely for the pulp fiction framework is the adherence to science and physics. For example, the dimensions and rotation rates are correct wherever artificial gravity is created by rotation. More intriguing to me was the approach used to get about the inner system without the story-killing delays of mundane fast Hohmann ellipses. Yes, they have a fusion drive of mythical efficiency, but at least it is not based on “alien technology” or anti-matter drives! Medium and large spaceships travel in near straight lines by constant or near-constant acceleration, pulling in to “service stations” occasionally to fill up. Granted, technical descriptions in this arena are light at best, but I do believe that it will be possible to do that at some point in the future, and proper use of that capability adds credibility to this story. One interesting associated feature is the use of hated drugs (terrible side effects) that are willfully or automatically injected in the crew when sustained high-g acceleration (such as 10 g’s) over a long time is called for. Do the math and you will see how almost straight line flight begins to look feasible. However, most of the time, only one g or less is used. One g will still get you from Mars to Ceres in days instead of months.

Leviathan Wakes begins with Detective Miller inside the mega-asteroid Ceres. Instead of hollowing out and creating an Earth-like environment ala Dandridge Cole and others, the community of misfits, miners, druggies, fugitives, government officials, shop owners, homeless, etc. inhabit Ceres in an extremely intricate complex of tunnels. I purposefully chose “complex” as the descriptor. I gave up following the travels of Miller and his partner through the maze of communities, commercial endeavors, and utility providers. I am convinced that Abraham and Franck (the authors) had a 3D map of the internals to keep track of locations.

Miller, a senior detective with a drinking problem (of course) works for a law enforcement contractor on Ceres. His partner is an Earther who has a tough time dealing with the belters. Miller is assigned the low priority job of locating a missing young woman. Naturally, one thing leads to another while a backdrop of unrest develops when a beloved captain and crew on a run-down ice hauler are nuked out of existence. Mars is blamed. As you might expect, the complexity of Miller’s life and quest begin to rival that of the Ceres tunnel system.

Meanwhile, Holden appears as the XO on the ice hauler shortly before it is destroyed. Fortuitously, he is sent to investigate a ship laying dead and broadcasting for help. He and four crewmembers take a small craft over to check out the stranded ship and are there when the ice hauler is nuked. What ensues is initially a fight for survival, followed by hunting down and exercising vengeance on the killer ship.

Holden is also down on his luck (of course) and in need of a break in life that never seems to come. Beyond that, he and Miller are almost polar opposites. Miller is pragmatic, worldly wise (in an asteroid belt context), thoughtful, and slow to reach conclusions. Holden on the other hand, reaches snap conclusions, acts brashly even in the face of potentially dire consequences, worries a great deal, and spends too much time agonizing over his own issues. When the two link up, there is nothing but negative chemistry that persists throughout the remainder of the book. That is, until… Well, that would be a major spoiler, so I will stop there.

From a plot, character, and action standpoint, I really enjoyed the first 2/3 of the book. But I found the final third disappointing. Everything was a bit too “far out” for me. It is not appropriate to explain that statement because I would give too much away. On the positive side, the last portion of the story will keep most readers guessing at what twist of events is about to take place.

I recommend this book to all those who “think big” in terms of our future in the solar system.