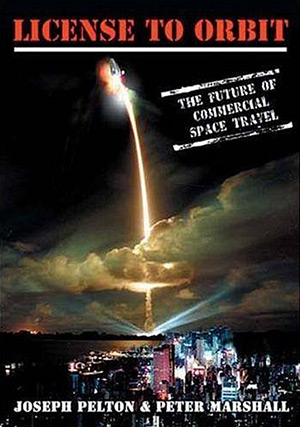 License to Orbit by Joseph Pelton and Peter Marshall examines the future of space tourism. It opens with a comparison of the opportunities for space tourism with the advances in aviation from its infancy. There is also quick reference to the rapid expansion of the computer revolution, perhaps to alert the reader to the unbelievable potential that technology may play. While many would agree with the premise that space tourism will follow a paradigm analogous to commercial air transport, there are extenuating circumstances with respect to space tourism. Among these are technology limits imposed by economics and risk rather than the state-of-the–art itself. Whether these comparisons hold any validity for space tourism will be revealed over the next decade.

That question aside, the authors have done a good job relating many of the critical issues. A performance table on the energy factors required for various flight envelopes is quite revealing. It contrasts the jet plane, space plane, and rocket to low-Earth orbit, by comparing several aspects, to include the relative energy ratio of each. This clearly shows that the power requirements of operating in the Earth’s atmosphere, as opposed to space (low-Earth orbit), are orders of magnitudes apart. Therein lays a fundamental problem. The velocities involved demand large and volatile propellant quantities and generate temperatures and pressures that require exotic materials and safety considerations far beyond the relatively simple jet airliner. Experience with the space shuttle has emphasized this aspect.

Much of the book is a “who’s who” in the privatization of space. An overview of the various companies and personalities allows the reader a glimpse into the corporate history and private lives of some of the primary players in this arena. Although the book covers space tourism, it also deals with more substantial issues such as the International Space Station re-supply and low-cost satellite launch for both commercial and military operations.

An overview of some of the more innovative yet simple technologies allows for a basic understanding of why some flight operations may work on a small scale. To help identify the various approaches, the book provides another table that covers a wide assortment of transport methods. Although many of the novel projects described use traditional chemical rockets, the JP Aerospace concept is perhaps the most original. It employs lighter-than-air technology and an ion engine in a phased approach to the problem of low-cost access to space.

The authors effectively communicate the enthusiasm and technical prowess of the large pack of entrepreneurs, intent on getting the average person a bit closer to a ride in space. However, they also offer a very wise observation that “most of the general public are not willing to risk their lives on bleeding edge technology.” Another observation is that these endeavors “… are unlikely to provide either breakthrough technology or reassuring safety and security features.”

The book provides a rich listing of Web sites that allow the reader to update themselves on the progress (or lack thereof) of the participants. Yet another table describes the eight spaceports that had been announced at the time the book was being prepared. The authors use many quotes such as this one attributed to Burt Rutan: “Spaceports are popping up everywhere, but they have nothing to fly… and with investments spurred by very little information. It’s almost humorous to watch the worldwide battle of the spaceports… they’re everywhere.”

There are quotes from numerous space tourism luminaries on cost and traffic volume, but many of the expected dates have come and gone without the estimates being realized. The authors state “one must hope that all of the new entrepreneurial space operators know — deep down inside — that failure means ruin for their program while success and continued safe operation means world acclaim.” Nevertheless, can an operation on such a thin line ever be successful?

The authors bring a significant level of knowledge and perspective to the book. Among their noteworthy affiliations, Pelton is the director of the Space and Advanced Communications Research Institute at George Washington University. He is the author of more than 25 books and was nominated for a Pulitzer Prize for his book Global Talk. Marshall is a director of the Arthur C. Clarke Foundation, and a former president of the satellite services company. The pair also coauthored Space Exploration and Astronaut Safety.

With the knowledge and awareness that the authors bring to the topic, this book holds the promise of making the reader more perceptive to the wide spectrum of space tourism operations.