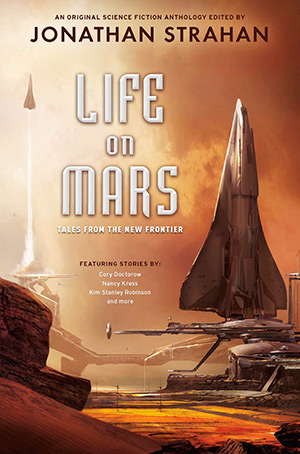 The strength of an anthology stems from both the writers and the editor. This is especially true when the stories have a common core such as this one: life on the new frontier of Mars. This anthology succeeds extremely well, thanks to the variety and intermingling of themes and perspectives, which makes the most of the excellent writing.

Writers from multiple countries, backgrounds, and genre provide 12 stories that bend the imagination and thought processes of the reader, and “bend” is the appropriate verb. Molding would imply that there was consistency of theme or intent on the part of the editor. Bend is the correct description. Strahan, an experienced and celebrated Australian writer and editor, has arranged these stories such that the reader is catapulted from one perspective to the next, not gently transported. Some may find the changes in gear ratio and style a bit too abrupt; personally, I prefer it.

Variety in subject matter within a common theme is another trait of a worthwhile anthology. Score another success for Strahan. “Attlee and The Long Walk” begins with a journey, as a young girl faces her fears and demonstrates her worth to the Shadowcats (her peer group) by spending a night defying the Old Roach. Author: Kage Baker

Yukimi feels compelled to run away from home, only to become marooned on a “Scraper,” a 200 year-old terraforming machine kept alive by a very elderly caretaker. “The Old Man and The Martian Sea” conspire to give the young woman a different perspective on life and values. Author: Alastair Reynolds

Suddenly, we return to Earth, where mutations have created new racial intolerances that play out as two “haters” end up at the same place in the desert to see a shuttle from Mars land. “Wahala” tells their story in the context of expanded bias and mistrust among the passengers and an unlikable alien. Author: Nnedi Okorafor

The catapult then takes us to “Chryse Plain” on Mars, where a thrill seeker from Earth is riding an atmospheric skimmer called a clamshell. In an attempt to spot the ancient Viking probe, she dips a bit too deep in the atmosphere and collides with two flying colonists. In the middle of Chryse Plain, survival becomes the bonding agent to overcome distrust. Author: Stephen Baxter

Another variety of conflict develops in “First Principle.” Gina, a second generation, physically augmented Martian, is tasked with playing chess with a dying boy from Earth who happens to be insufferable and a bigot. The “First Principle” on Mars requires that no one pass judgment before walking in the shoes of the judged, but that appears to be impossible. Author: Nancy Kress

“Martian Chronicles” is a Monopoly-on-steroids game that David Brionn Oglethorpe Smith (age 15) is extremely good at, having amassed the largest, most powerful virtual corporation on Earth. Now he has to give it all away because his parents have decided to emigrate to Mars where free enterprise is wide open, not constrained as it had become on Earth. Be prepared to defend some of your closest held beliefs as far as “haves” vs. “have nots” when you read this one! Author: Cory Doctorow

In “Goodnight Moons,” readers are brought back to the near (relatively speaking) future and given a front row seat on the first trip to Mars. All is going well until day 37, when Zoe tosses her cookies and the EPT stick turns pink. Decisions, media circus, moral issues, crew cohesion—everything gets touched on from that point forward. Author: Ellen Klages

“The Taste of Promises” slingshots us forward to a future of wild frontiers and conflict. Tiro and his brother, Eo, are in search of a fresh body. More specifically, they are seeking a body for Eo, who has transcended to pure intellect due to a genetic experiment gone bad. Their quest takes an unwanted detour when they are thrust into saving a village from marauders. Author: Rachel Swirsky

“Digging” presented an approach to making Mars more hospitable to humans that was new to me. Dig a hole deep enough and the air pressure will increase to a point where pressure suits are not required. The composition must be altered, of course, but that does not seem unreasonable. I have not checked the numbers so I cannot vouch for the idea, but it does make for an interesting setting. The irony of the ending reminds us that some things will probably never change. Author: Ian McDonald

Fans of immersive gaming will find “Larp on Mars” entertaining. Ravi, Penn, and Jace also find out that real adventure can be almost as entertaining as their imaginations. Author: Chris Roberson

“Martian Heart” has literal and figurative meaning in this poignant story of an illiterate hero and a very bright heroine who elect (under duress) to go to Mars as prospectors to escape the dystopia of Earth. It is difficult to say more without giving away too much. This is my favorite of the twelve. Author: John Barnes

Kim Stanley Robinson rounds out the dozen with “Discovering Life,” a short, tongue-in-cheek look at how discovering any form of life on Mars may complicate things.

Life on Mars is classified on Amazon as age 12+ and Young Adult, but most of the stories have themes and underlying messages that will provoke thought at any age. I thoroughly enjoyed this anthology.