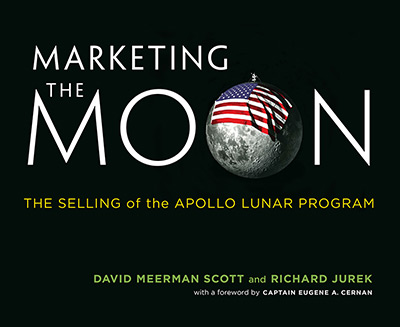 Most people agree that the Apollo program was a triumph of science, engineering, and ingenuity. Books about the technical achievements of the Apollo program and associated politics are a staple of space advocates. What is not so well known, and has been under-reported, is that Apollo was also a triumph of marketing. In their book Marketing the Moon, authors Richard Jurek and David Meerman Scott present a new perspective on the Apollo program by focusing on the means by which marketing was used to sway public opinion in support of the program.

In the book’s foreword, Apollo 17 astronaut Captain Eugene A. Cernan observes that “the astronauts became the leading edge of one of the biggest marketing efforts in history. We were the voices of a nation marketing the United States of America…. There were other marketing efforts by NASA and the aerospace contractors, but no matter how intense their efforts were, the astronauts were the ones people wanted to hear and see.” Cernan goes on to write that “a personal association with someone who ‘had been there’ is what everyone wanted” — something that is still true today.

Emphasizing the importance of marketing, the book’s introduction opens with a statement Werner von Braun made during the course of the Apollo 11 mission: “Because without public relations…we would have been unable to do it.” This marketing success is credited to the unique joint relationship that existed between the NASA Public Affairs Office and the public affairs personnel of the many contractors associated with the space program. The public affairs employees of these companies played a key role in providing technical information to the press concerning their company’s space hardware.

Surprisingly, given the very visible nature of NASA and its size as a government agency, in 1969 there were just 146 public affairs employees distributed across 15 sites nationwide. Perhaps as a consequence of this smallness, the individual press offices competed to outdo one another in the production and distribution to the press of innovative and informative press kits. Even so, NASA’s approach to public affairs was oriented toward reporting. Quoting Julian Scheer, NASA Public Affairs chief: “We don’t put out publicity releases. We put out news releases.”

While the book’s central theme is the marketing efforts associated with the Apollo program, this well-researched history goes beyond the boundaries of the title. It looks at space in popular culture and popular culture’s influence upon the pioneers of rocketry, especially the influence of science fiction. The authors also call out the importance of the 1950’s Collier’s series of space articles, which had a major impact on public perception of and interest in space travel. Noteworthy are two Gallup polls taken six years apart: one before and the other after the Collier’s space series. Public opinion on the possibility of a human mission to the Moon being undertaken within the next 50 years had risen from 15 percent to 38 percent with much of that change being attributed to the impact of the Collier’s articles on space exploration.

The success of the Apollo program, and the associated marketing efforts, made everyone a winner. NASA’s successes made the United States look good to the rest of the world; the corporations that were contracted to build the hardware looked good to their customers due to the technological and managerial demands of the Apollo program; and the media looked good to the public for providing “free” coverage of this greatest of human adventures.

Marketing the Moon is richly illustrated with photographs, artwork, and advertisements ranging from the cover art for Jules Verne’s novel From the Earth to the Moon published in 1865, to a 2010 photograph of a test flight of the Virgin Galactic SpaceShipTwo vehicle, VSS Enterprise. Marketing the Moon is a well written and researched work that provides a unique perspective on the Apollo program and is a recommended read not only for fans of the space program but also for people more broadly interested in marketing and Apollo’s place in American culture.