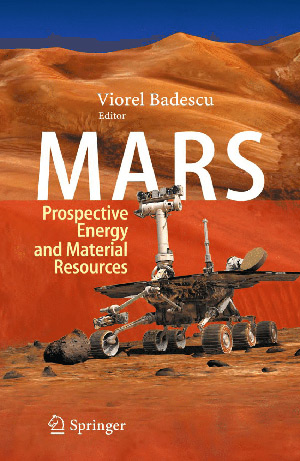 A reader should expect a lot from a book with a budget-busting $169 retail price. Does Mars: Prospective Energy and Material Resources (Mars-PEMR) live up to its lofty price tag?

It depends on the reader. A reader looking for a light, casual read or background information about Mars will not find much of interest in this hardcover textbook containing 26 chapters, each a fully referenced research paper on some alluring aspect of Mars’ future potential. But if you breezed through The Case for Mars (Zubrin & Wagner, 1997) or Entering Space (Zubrin, 2000) and enjoyed the technical detail, Mars-PEMR was written and priced for you.

In editing Mars-PEMR, Badescu has pulled together over 50 authors and contributors including some familiar names like Jeff Hoffman, Robert Zubrin, Donald Rapp, Joe Palaia, and Penny Boston. Other chapters feature researchers you may not have come across before.

Whereas most other books about Mars discuss reaching or landing on the Red Planet, Mars-PEMR bypasses those mission segments and focuses on the technologies necessary for humans to someday live and thrive on the surface of Mars. The book’s human-centric theme makes it a unique reference for researchers, since human explorers and settlers add unique capabilities and impose unique requirements upon systems and solutions.

Badescu begins with energy, the single most important concern for human habitation on Mars or anywhere else. The first chapter presents an introduction into past energy systems on robotic missions, followed by four chapters discussing Martian solar energy potential. Subsequent chapters round out the spectrum of energy possibilities by covering fuel cells, nuclear fission, nuclear fusion, and geothermal energy.

Chapter 12 takes a methodic approach to comparing integrated systems of primary/backup nuclear fission, fuel cell, and photovoltaic array systems. Given reasonable assumptions about the requirements of a future early outpost, the authors reach some surprising conclusions about the most effective combinations of energy systems. Chapter 13 ponders the bigger picture, including the critical economic importance of energy production on the Martian frontier.

The second half of the book focuses on resources, including surface exploration, in-situ resource utilization (ISRU), and other life sustaining technologies. Agriculture, a popular sub-theme in this section, entices several authors to offer their informed perspectives on soil nutrients, water transport, hydroponic systems, and greenhouse technologies.

The depth of technical detail in each chapter varies but is usually very high. Don’t buy this book if mathematical equations frighten you! Skimming past most of the math proofs, this reviewer still needed about four weeks to finish the book (an hour or two per chapter each evening).

Some of the technologies discussed in various chapters are ready for use today, like photovoltaic solar arrays. Others, like small-scale nuclear fusion reactors, won’t be found on the shelves of your local Wal-Mart quite yet.

Most chapters adhere to current scientific beliefs about surface or atmospheric conditions on Mars, but others rely on yet-unproven assumptions. For example, some of the book’s discussions of human physiology in a partial gravity environment lack evidence from proven medical research. Even safer topics like radiation shielding or plastics degradation await surface radiation flux data from the RAD instrument on the upcoming 2011 Curiosity rover. In an intriguing chapter near the end (24), the author proposes building an initial Mars settlement inside the North Polar Ice Cap. Since we currently lack detailed knowledge about conditions and resources at the North Pole of Mars, this proposal remains a tantalizing possibility and invites future research and engineering studies before we encourage settlement there.

The maelstrom of research related to Mars exploration (human or robotic) continues to whirl at a feverish pace. Mars: Prospective Energy and Material Resources steps into the middle of the storm with many thoughtprovoking ideas for how to live there. We can only hope this research will someday give us a chance to settle on the Red Planet. With enough time to study the material and references, most expert-level readers will consider this high-priced book a bargain.

Brian Enke is a senior space research analyst at the Southwest Research Institute in Boulder, Colorado.