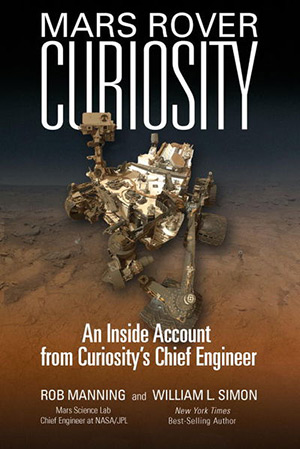 What does it take to conceive, design, build, launch, and control a spacecraft so far from Earth? Aside from the technology and science, human abilities and emotions are part of the mix. What kind of craft would need to be built to accommodate the agenda of all the players involved?

Rob Manning, a graduate of CalTech and chief engineer at the Jet Propulsion Laboratory on the Curiosity Rover mission (as well as other earlier missions to Mars), along with William L. Simon, a New York Times best-selling author, have written a no-nonsense account of how the concept for an entirely new and larger Mars rover went from an idea to actually landing on Mars and making extraordinary discoveries. Rob Manning, in the role of mother hen to the diverse people who worked on the project, writes in a folksy yet intelligent, understandable yet technical style. The readers find themselves caught up in the drama of failures and budget. The book’s black-and-white pictures enhance the discussion.

The Mars Science Laboratory and its Curiosity Rover are unique—the science and engineering that went into them were a total departure from the missions that had gone before. Millions of lines of code had to be written. Testing was a challenge, since conditions on Earth are not the same as on Mars. The mission became very expensive. By the time it landed on Mars, the project cost $2.6 billion, took two years longer than projected, and frayed most nerves. The scientists were allowed to choose the site for the landing, the experiments to be made, and the ultimate exploration of Sharp Mountain—all with the goal of finding, among other things, water on Mars.

On August 12, 2012, Curiosity landed on Mars. It studied the ancient history of Mars and how it compares to Earth. It found geologic features not seen on other parts of Mars explored by earlier missions. But most of all, it found evidence that there was water in Mars’ past. The book ends at approximately Sol 200, but of course the discoveries continue.

NSS members will find this book to be entirely readable and interesting, written to provide rare insight into how much work goes into creating, building, launching, and operating a spacecraft on another celestial body.