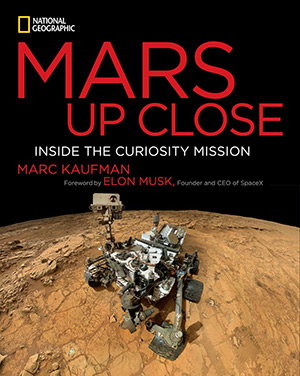 The current Curiosity Rover Mission to Mars continues to succeed—and in ways not even imagined, but hoped for, by the mission planners, scientists, and engineers operating the mission.

This book is a coffee-table size, visually beautiful book containing color pictures and charts. The narrative is enhanced by highlighting the scientists and engineers who were responsible for the day-to-day operations of the rover. Embedded at Jet Propulsion Labs for two years, the author learned about the people involved and how their experiences helped them during crises. He participated with them during the highs and lows of the mission. The book is crammed full of stunning photos and artist conceptualizations of Mars and Earth. The photos make Mars an inviting place to visit one day with its stark, pristine landscape.

The book begins with Curiosity’s landing on Mars in what NASA described as the “seven minutes of terror.” Throughout the book, as more and more discoveries were made about Mars with tools and cameras specifically designed for the mission, from the unusual rock formations to what was found in the rocks and soil, the author reports how the scientists compared these findings to similar events that occurred in Earth’s past. This led them to hypothesize that Mars was a much wetter place for far longer than originally thought. Knowing that water was abundant on Mars in the past makes it enticing to believe that other findings might one day reveal Martian life.

The narrative of Curiosity’s trek ends as it approaches the mountain, but the book does not end there. With the author’s interest in astrobiology, he compared how life exists on Earth in the most extreme environments to how life might exist on Mars. The author looks at the potential for human exploration, which would take far less time than having to program the rover from Earth. He also looked at the risks involved for humans. Before humans can live and work on Mars, robots might first arrive to build the habitats.

NSS members will find this book to be entirely enjoyable, visually stimulating and eminently readable.