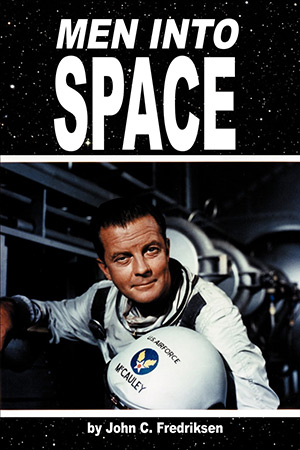 The title, Men Into Space, may give the impression of a factual contemporary or historical essay. However, it is the story of the first television series designed to convey the excitement of the pending flight of the first astronauts. What makes this dramatic series so memorable is that it was first shown in September 1959, just two years after the launch of the first Soviet Sputniks and immediately preceding the flights of Gagarin, Glenn, et al.

It was not actually the first production television series about spaceflight. That accolade would be the province of Captain Video and His Video Rangers, which aired between 1949 and 1954 and was primarily a children’s show (placed centuries into the future). Men Into Space, on the other hand, was a more adult and believable presentation of events that were literally just a few years away.

The book consists of three segments prefaced by a few pages in which the author, John C. Fredricksen, reveals his inspiration for writing the book. What was interesting for this reviewer is that I (and probably thousands of other kids of that era) might have written these same words in describing our feelings as young teens during this very prophetic and impressionable period of history—for we were products of both the Cold War and the opening salvos of the Space Age. Few eras have been so emotionally motivating to impressionable youngsters whose eyes had been affixed to the stars by the shouting newspaper headlines that were the portent of adventures soon to come. The book then, is a flashback in time for the author, who has a doctorate in history from Providence College and is the author of 30 reference books on a variety of topics.

The first segment of the book is entitled “Space Was New/The Future Was Now.” It is a brief compendium of the history of spaceflight, science fiction movies, and the origin of the TV series. The author manages to sum up the current dilemma of NASA in the segment’s closing when he states, “Suffice it to say, the diminution of America’s manned space program represents the loss of something golden, and with it, a good part of who we are as a people.”

The second segment, “Cast and Crew,” is also succinct. Here, the star of the series, William Lundigan, is introduced and his rise to limited stardom is documented. Fredricksen notes that Lundigan had starred in a 1954 sci-fi space travel flick, Riders to the Stars, which had some interesting concepts and astronaut selection criteria, but overall was an “unmemorable film” in the author’s opinion. Based on this movie and some other work done by Lundigan, Fredricksen notes that he was a natural choice for the limited budget faced by ZIV-United Artists Inc.

Among the “crew” aspect of the series, its producer Lewis Rachmil had a notable career, having been nominated for an Academy Award for the film Our Town among his credits. Artist Chesley Bonestell, who painted the backdrops for the various space scenes, is well known in the astronautics community for his initial work with Willy Ley in the book Conquest of Space, as well as several sci-fi space movies of the 1950s. It was also interesting that the series was scored by musician and composer David Rose, who wrote numerous themes for various TV series—although this was not a memorable one.

The final entry in this chapter is the Atlas rocket. At the time of filming the series, it was the only large rocket whose presence was awe inspiring and whose configuration was somewhat known to the public. Using actual footage of the rocket ascending from its launch pad at Cape Canaveral, the producer did not have to stretch for special effects except for some of the on-orbit extravehicular scenes as well as those on the Moon.

The third segment of the book details each of the 38 episodes by title, date aired, cast, scriptwriter, director, and a few pages detailing the plot. Although each of the 30-minute programs had a reasonable story line—especially for the contemporary period—today’s viewer who has some knowledge of space operations, past and present, will find the absence of such common terms as rendezvous, docking, or extravehicular activity conspicuous by their absence. All of the episodes are available for viewing on the Internet or for purchase on DVD.

Two addendums to the book include a brief interview with Lundigan’s daughter Anastacia, who was about three at the time of the filming. The second is a short list of consumer merchandise such as lunch boxes and a neat space helmet spawned by the brief series. Although many readers don’t usually pay too much attention to Endnotes, these have some interesting facets. One challenge to the reader is the author’s penchants for polysyllabic words, so keep your dictionary handy.

Overall, the book will have an emotional appeal to those who are of the age that they can recall the series, or who are true sci-fi space travel aficionados.