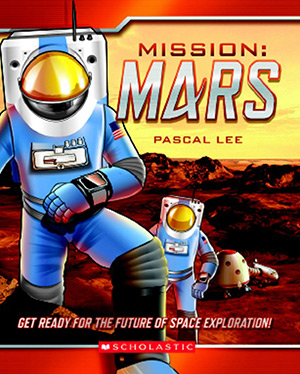 This wonderfully-illustrated children’s book is packed with clear explanations, fun-to-know facts about Mars, and personal tips about exploration from one of NASA’s top planetary scientists.

Pascal Lee, a scientist at NASA Ames Research Center in California, urges “new recruits” to get ready for the first human trips to Mars around 2035. By that time, the book’s target readers will be graduating from college and graduate school.

To prepare them for their future journey, Mission: Mars is divided into six chapters, called phases. Phase 1 is “Discover Mars” which uses nice graphics and analogies to show where Mars is and how long it takes to get there: in a car going 70 mph, 410 years! Also included are two lists of five things each: how Mars is different from Earth, and how Mars is deadly. This phase ends with a bit of history and an example of life found inside an Arctic rock.

Phase 2 is “Prepare for Launch.” This phase introduces analog Martian environments like the Mojave Desert in California and Devon Island, Canada; selection criteria for crewmembers; rockets needed for launch; NASA’s current launch sequence (using the Space Launch System); and an overview of the Mars transport vehicle.

Phase 3, “Navigate Space,” is about the journey from Earth to Mars. A lovely cut-away view of the Mars transport shows the Earth Return Vehicle, Service Module, Inflatable Habitat, and Mars Lander. This chapter also provides details about a possible “pit stop” at Phobos, a follow-up to the mission the author has proposed to NASA for a Discovery mission in 2021.

Phase 4 is “Gear Up for Survival,” which starts with an 8-step, illustrated landing on Mars and then moves into spacesuit design. A cool idea noted here that I hadn’t heard of before is having the crewmembers’ initials carved into the sole of their boots to identify their footprints! A cutaway of the Mars Hab (sent ahead via cargo flight) shows a three-deck capsule attached to a tunnel leading to a pressurized rover, and includes two other airlocks: one for an ATV and one for people. Though the radiation danger is discussed in this chapter, there is no mention of burying this hab. Water tanks are shown in the nose, supposedly to provide some protection for the sleeping quarters which are on the top floor. A whole spread is devoted to the ATV, and another to the Mars “Camper” or pressurized rover.

A large map of Mars opens the “Explore the Red Planet” phase 5 chapter. Included on the map are some “tourist” features such as the Face on Mars, the Jumbo Elephant, Alien Bushes, Bigfoot, and the Lost City. The following pages explain what these “attractions” really are, as well as major features such as Hellas Basin and Olympus Mons. The last spread of this phase includes the internal structure of Mars, something not usually covered in children’s books.

The final phase is “Plan a New World,” via a very short, pictorial explanation of terraforming. The end pages include a review “test” of what the “recruits” learned and a glossary.

With Pascal Lee’s expertise in planetary science, parents and teachers can be assured that all the astronomical and geologic data is accurate. The speculative parts are all based on NASA’s Space Launch System and proposed mission sequences familiar to many in the space community. But I question stating as fact that the radiation shelter on the Mars transport “has protective lead walls.” My understanding is that lead is useful for stopping X-rays, but ions are the major radiation danger in space. Lead hit by cosmic rays produces deadly secondary particles that might actually increase dosage. However, the important point is that radiation is a danger and that this danger needs to be addressed. The book does state that food and water would be used for shielding, consistent with numerous recent studies.

As a space enthusiast, I absolutely recommend Mission: Mars to children, their parents, and teachers. The amount of information jammed into this 48-page book is quite impressive and yet presented in bite-sized pieces easy for kids to gobble up.