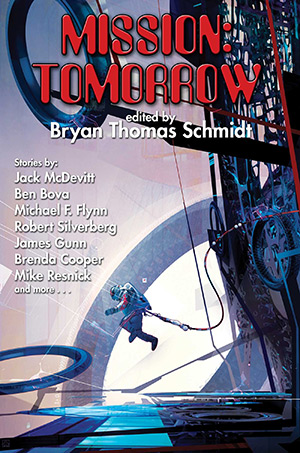 What does the near future hold, especially in space?

All but two stories in this collection were commissioned for this book. The contributors cover most corners of science fiction. Hard science fiction stalwarts, such as NSS Governor Ben Bova and Mike Resnick, join relative newcomers like Curtis C. Chen and Jay Werkheiser, plus a few in-between, such as Sarah Hoyt, who play with both fantasy and science fiction.

The two reprints, “Sunrise on Mercury,” written by Robert Silverberg in 1957 and James Gunn’s 2001 story “The Rabbit Hole,” fit the theme well. Although Silverberg’s science is dated, it is still a good read.

That is a good summary of all of these stories. All are good reads. The canvas for these tales is the solar system from Mercury to Kuiper Belt. The time frame ranges from tomorrow to one century from today.

The stories cover a range of topics. Some, including “Rabbit Hole” and “Sunrise on Mercury,” involve space exploration. “The Race for Arcadia” by Alex Shvartsman takes readers on a voyage to a planet outside the solar system. “A Walkabout Amongst the Stars” by Lezli Robyn is a trip to the solar system beyond Pluto. Jay Werkheiser’s “Around the NEO in 80 Days” describes a first manned mission to a near-Earth object. The first Mars settlement is described in Jack Skillingstead’s “Tribute.”

Others use the solar system as a backdrop for research. “Tombaugh Station,” by Robin Wayne Bailey looks at a telescopic observatory built on Pluto. “Orpheus’s Engines” by Christopher McKitterick is a first contact story set in orbit around Jupiter. In “On Edge” Sarah Hoyt shows the weird result of a research grant intended to create an instant package delivery system.

“Airtight” (Michael Capobianco), “Windshear” (Angus McIntyre), “Malf” (David D. Lavine), and “Ten Days Up” (Curtis C. Chen) are stories showing people working in space as an everyday activity. All deal with exceptions in a work routine. “Iron Pegasus” (Brenda Cooper) sends an asteroid miner on a rescue mission. ”Windshear” is also a rescue mission, this one in Venus orbit.

“Malf” and “Ten Days Up” show employees responding to problems in their workplaces—navigating a space rock heading to Earth in “Malf” and dealing with issues on a space elevator in “Ten Days Up.” Both take place on or near Earth, showing a society actively using space. “The Ultimate Space Race” by Jaleta Clegg makes space the setting for reality TV—with an interplanetary space race entertaining Earth-bound couch potatoes.

Other stories use space as a setting for a story. Michael F. Flynn places a noir detective story on Phobos in “Panic Town in a Backward Moon.” “Excaliber” by Jack McDevitt is a conspiracy story. “Rare (Off) Earth Elements (A Sam Gunn Story),” by Ben Bova is a classic adventure tale set in interplanetary space. Mike Resnick’s “Tataros” is a man on the run tale which could appear in a late twenty-first century version of the 1920s mystery magazine, “Black Mask.”

Perhaps the most impressive aspect of this anthology is that space is not the star of these stories. It is a place for the story to occur, in the same way it could occur (under different circumstances) on Earth. Space is shown as a place where ordinary people live. While an extreme environment, it is not impossibly extreme. It is closer to working on a North Sea oil platform than to a 1940s science fiction adventure.