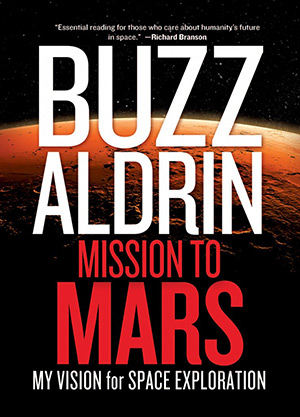 Buzz Aldrin is known around the world as the second man to walk on the Moon, and as a tireless advocate for human space exploration. Lesser known is the fact that he holds a doctor of science degree in astronautics from MIT. He knows the theoretical side of space travel as well as the practical side. This book, Mission to Mars, is a manifesto that delivers Aldrin’s views on what course America should take in space, now and in the coming decades. It’s hard to imagine anyone in a better position to assess what needs to be done or how to carry it out.

The book begins with Aldrin stepping off Air Force One in Florida on the day in 2010 when President Obama announced the termination of the Constellation return-to-the-Moon plan and its replacement with a flexible path that would send NASA astronauts to an asteroid by 2025 and into orbit around Mars by the 2030s. The iconic Moonwalker heartily endorsed these decisions. The Constellation program was behind schedule and over budget. The new path seemed both doable and also a reasonable progression of steps toward an ultimate landing on Mars. Aldrin feels that, in the long term, colonization of Mars is imperative.

After some biographical information about his life before joining the astronaut corps, Aldrin gives a synopsis of the history of American space efforts up to the present day, interspersed with his thoughts on decisions that were made along the way, both good and bad. This historical information provides a backdrop for his plan for what the United States as a nation should do now in space.

Aldrin calls his plan for America’s future path in space a Unified Space Vision (USV). It includes things that he believes America should and should not do in space. Specifically, he believes that America should not get into a space race with China, like the Cold War competition between the U.S. and the Soviet Union in the 1960s. He believes that American astronauts should not land on the Moon at all. America should instead apply its resources to building capability and infrastructure in space that will support expansion beyond the Moon—first to an asteroid, and then to Mars. An asteroid visit would give NASA experience in a long-duration mission far from Earth.

When the oxygen tank on Apollo 13 exploded on the way to the Moon, the crew was able to reconfigure the craft, swing around the Moon, and three days later splash down in the Pacific Ocean. That option won’t be open to a craft heading to an asteroid rendezvous that is several months away. Systems and procedures can be proved on an asteroid mission that will be crucial to success in a Mars mission. That same operational experience won’t be provided by a robotic mission to capture, return, and sample a small asteroid from lunar orbit. Aldrin doesn’t see this modified asteroid mission as fulfilling the purpose of advancing progress toward humans on Mars.

In the longer term, the USV foresees regular service between Earth and Mars, using the Aldrin Mars Cycler (an idea presented at a meeting at NASA’s Jet Propulsion Laboratory in October 1985). Once set in motion, a cycler will repeatedly travel between two planets with negligible use of fuel. Launched from Earth, as it flies past Mars it would use a gravitational slingshot to boost it back to Earth. Swooping around Earth, it would head off to Mars again. By launching several cyclers at intervals, a steady stream of commerce could be maintained between the two planets. Cyclers represent the ultimate in reusable spacecraft. Once in service, they stay in service, and as a bonus after launch, they don’t require any fuel to keep going beyond minor course corrections. The one tricky part is to rendezvous with them as they zip by a planet at high speed, transferring personnel and cargo on the fly. This calls for very precise timing. (A missed rendezvous may result in the kind of mission to Mars planned for 2018 by Dennis Tito’s Inspiration Mars organization.)

Aldrin does not envision America going it alone in space, but rather leading an international push into human space transportation. He envisions America providing the systems that transport people across the void of space. People from any and all nations would be the passengers, initially colonists on Mars, but ultimately throughout the Solar System, wherever a living can be made, tapping the vast resources that circle the Sun.

Aldrin asserts that the key to the takeoff of a Solar System economy is found in the current efforts to get people and profit-making enterprises into space. Suborbital flights to space such as those offered by Virgin Galactic and XCOR will presumably be followed by orbital labs and hotels such as those being developed by Bigelow Aerospace. Once it is clear that there is profit to be made in space, development of new ways to access space and new things to do once you get there will accelerate.

The ultimate goal of Aldrin’s USV is humanity’s permanent settlement of Mars. This means people will leave Earth with no plan to return. The human presence on Mars will grow with each trip of a cycler delivering more people and equipment to build a sustainable, self-sufficient colony. Aldrin sees that as humanity’s destiny, and the leadership that enables it to happen as America’s proper role.