Book Review: Missions to the Moon 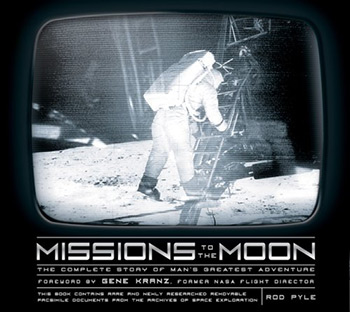 At the 40th anniversary of the first Moon landing, Rod Pyle has created a book that is visually fascinating, detailed, and just plain fun to read and explore. Missions to the Moon covers human space exploration from the first dreamers who thought of fantastic winged creatures inhabiting the Moon, to the current plans for America’s return.

Twenty different enclosures and foldouts add significantly to the experience of this book, giving a behind-the-scenes look at the programs. For instance, after reading the forward by former NASA flight director Gene Kranz, one can examine copies of the Flight Director’s Mission Log, written in Kranz’s own hand during the emergency of Apollo 13.

The book begins at the earliest age of modern rocketry. The author explains that during World War II, German V-2 rockets rained down on London, causing devastation. The rocket’s famed developer Wernher von Braun allegedly commented that “the rocket worked perfectly except for landing on the wrong planet…” (Pyle 08).

The illustrations and photographs included on every page are spectacular. America’s first space walk comes to life in the famous picture of Ed White floating over the blue and white Earth. After reading the enclosed Apollo 8 press kit, it is easy to imagine riding in the command module and being one of the first humans to directly view the pock-marked lunar far side.

Pyle reviews Apollo’s hardware in detail, from the mighty Saturn V and its incomparable F-1 engines to the exotic Lunar Module (LM), described as having a pressure hull “about twice the thickness of a soft-drink can” (p.26).

The journey of Apollo 11 is featured in depth, and relived through the breathtaking photographs from the lunar surface. It is easy to imagine the tension of the 1202 and 1201 computer program alarms while analyzing the enclosed LM descent chart, which Neil Armstrong and Buzz Aldrin followed to land at Tranquility Base.

With the Apollo 14 flight, the golfing public can enjoy Alan Shepard’s famous six iron shot that went ‘miles and miles and miles’ at Fra Mauro. Fans of auto racing are treated to a “lunar grand prix,” as Apollo 16’s John Young put the Boeing-built lunar roving vehicle through its paces on the Moon.

The author also gives attention to the world’s other space programs. A pullout of a Pravda newspaper facsimile for January 22, 1969 covers the successful joint flights of Soyuz 4 and 5, providing an interesting look into the Soviet program. The book concludes with a look at the space programs of Japan, China, and the European Space Agency, and finally the U.S. plans for a return to the Moon with the Constellation program.

Rod Pyle’s stellar creation unfortunately suffers from a few typographical and factual errors, including the wrong date of March 9th for Yuri Gagarin’s historic flight on April 12, 1961, and placing Deke Slayton as commander of Apollo Soyuz Test Project instead of Commander Tom Stafford.

What is amazing about Missions to the Moon is how engaging and entertaining it is, while still providing extensive details about the space programs. Examining the enclosed charts, maps, mission reports, and many foldouts is like having an all-access pass to the back rooms at NASA. This magnificent book is great fun for all ages. But it may need to come with a warning: do not become too captivated and lost in the pages of this virtual journey to the Moon!