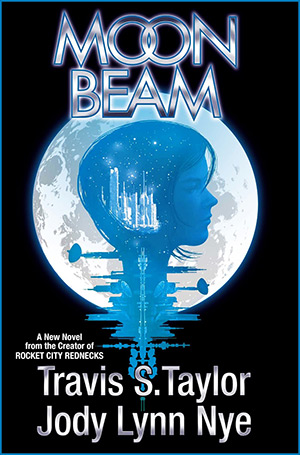 Barbara Winton dreams of living in space—going to the Moon colony and working on the new frontier. It is not an unusual dream at sixteen, and a dream six other teens have achieved. They are the Bright Sparks, part of an ongoing reality show. Dr. Keegan Bright recruits teens for the science show, which moved to Armstrong City on the Moon several years back. Barbara has followed it religiously, entering online science and engineering challenges they offer.

In Moon Beam, a science fiction novel by Travis S. Taylor and Jody Lynn Nye, Barbara realizes her dream in the first chapters.

The science and engineering challenges Barbara has been entering are an unadvertised recruiting tool for the Bright Sparks. Barbara, an Iowa farm girl, is being invited to join the Bright Sparks team.

Does she accept? Of course! Barbara goes through three months of astronaut training in Houston and is on the Moon (figuratively and literally), the newest member of Keegan Bright’s team of science wunderkind. She finds herself in a cross between space camp and reality television, with five other bright teens between the ages of fourteen and eighteen.

This is not summer camp. They take part in cutting edge projects. Barbara’s first assignment involves building a radio/radar telescope on the far side of the Moon, Project Moon Beam. She and the other Bright Sparks sixteen and over will be working by themselves thousands of kilometers from Armstrong City.

The adventure starts out routinely. Then things go very wrong. Not just at Aldrinville, on the far side where the Bright Sparks are, but in Armstrong City, and all over space. Barbara and her three companions are cut off on the far side of the Moon. No one can rescue them. Survival depends on their actions over the next two weeks.

Taylor and Nye build a plausible framework for their adventure. They posit a near future with a fair-sized Moon colony—several thousand by the time the story takes place. Families live on the Moon. One Bright Spark was living on the Moon when accepted into the program. Armstrong City is a space tourist destination.

A science reality show fits into this future. Entertainment is profitable. Shows featuring teen groups have been around since the 1950s. Teens and young adults are target audiences for advertisers. A show combining teens and science would be an easy sell to sponsors. If it kept and maintained an audience, it could pull in a lot of money.

The work to build the telescope is little different from the work Barbara did on her Iowa farm, other than being done on the Moon. The plot is believable and entertaining.

The authors add wry twists. Each chapter ends with tweets from Bright Sparks’ viewers. Some offer insight, but many are vapid, offering a sly contrast between the viewers and the six protagonists.

There are a few false notes in the book. Lunar cities are built at Apollo landing sites. (Why? With all the Moon to build on?) It also contains one of Taylor’s trademark exceedingly unlikely trajectory events. This one has only thousands-to-one against odds happening instead of billions-to-one, nor does the success of the plot depend upon it.

Moon Beam delivers an entertaining story, reminiscent of Heinlein’s young adult novels. It mixes hard science fiction, youthful protagonists, and an exciting plot in a well-balanced package. It offers a future any space enthusiast would want to belong to. Anyone seeking to turn a youngster into a space enthusiast could do worse than slipping that teen a copy of the book. After reading it first, of course.