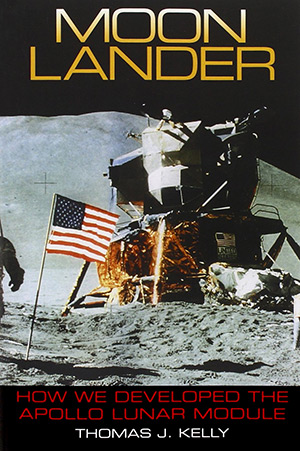 Thomas Kelly was a life-long employee of the Grumman Aircraft Corporation and became the Chief Engineer of their effort to build the Apollo program’s Lunar Module (LM). The book follows Grumman’s efforts to compete for, engineer, manufacture, and fly, the LM.

Kelly skillfully describes the contractual negotiations and, in doing so, recreates an era that shows the close and unique relationship between the NASA of that period and contractors such as Grumman. Although Grumman won the contract based on their design, the spacecraft, which landed men on the Moon seven years later, bore little resemblance to that initial proposal. The final design was the result of close collaboration between Grumman and NASA engineers.

Kelly’s reminiscences speak well for the passion that he and the other LM engineers and technicians felt for the project. He mentions many of the participants, and paints a mostly positive portrait of these pioneers, many of whom had been with Grumman since World War II. Making the transition from designing and building navy fighters to high-tech space vehicles was an interesting and challenging move for most. As Kelly says, “There were no precedents for what we were doing.”

The LM was a unique part of the Apollo project in that it had to perform many of the basic functions of rest of the vehicle—some had never been attempted before. It had to land vertically, provide its own launch pad, depart vertically, provide a reaction control system about all three axes, achieve lunar orbit, and perform rendezvous and docking—while providing life support for two crewmembers. All of this had to be accomplished under extreme weight control limits.

There were many uncertain variables with respect to the lunar surface (the design had to be frozen before any of the Surveyor spacecraft had revealed the basic physical composition of the lunar surface). The possibility of the LM tipping over at touchdown produced a litany of possible conditions that had to be anticipated. The allowable sideways movement at touchdown, the angular surface it was contacting, and possible sliding action all had to be mitigated by a sense of rational limitations.

Kelly’s description of the reliability factors and the critical elements of systems design are fascinating reading and provide a practical guide for contemporary elements of a Mars lander. The weight penalty of redundancies caused considerable engineering analysis. The segment on in-flight maintenance may also be of interest to today’s designers as it describes the decreased reliability from such a model.

Designing a spacecraft for a mission that had never before been accomplished, and that would be executed for the first time with men aboard, was a daunting challenge. Something as simple as how much room would be needed for the astronauts to put-on and take-off their space suits actually determined the cockpit dimensions. This was amazing since the suits themselves had yet to be fabricated.

It was fascinating to read the interchange that took place regarding fuel cells verses batteries—the issues of complexity, reliability, and weight. The further I got into the book, the easier it became to understand why and how the US lunar program succeeded. If the other contractors were as dedicated as the Grumman team—and they were—the program could not fail.

The author notes the tens of thousands of drawings that were required. In the days before computers were integrated into the engineering, drafting, and manufacturing process, it is a wonder that the program progressed as fast as it did. An incident is included that highlighted some negative aspects of Grumman’s inability to make effective technical decisions, and Kelly in particular—for which NASA’s Joe Shea criticized them.

The author related the critical weight reduction program and the painstaking process to track failures and respond to them to ensure extremely high reliability. Kelly described the crisis at Grumman when the first unmanned flight-test article (LM-1) was emphatically rejected by NASA after it had essentially passed all of the test criteria at Grumman’s Bethpage, Long Island plant. The extent that Grumman and its suppliers went to assure quality and reliability were impressive. Among them was the painstaking process of routing wires and sealing junctions.

Among the many problems that delayed delivery of the critical first manned flight article (LM-3), were the ever present leaks in various systems exacerbated by stress corrosion. It was the delay of LM-3 that prompted NASA’s George Low to propose sending Apollo 8 around the Moon, rather than delay the flight test program waiting for it.

In some areas the book could provide a college text for an MBA program, as it delves into management and economics of a high-tech program, cost control, and subcontractor relations. PERT became a critical part of tracking and managing progress as NASA started to pinch dollars as early as 1965.

Kelly aptly describes the intensity with which the Apollo astronauts approached their task of learning the various LM systems—spending untold hours in the simulators. The sims were made by Singer-Link, a name made famous by the Link trainer of WWII.

The author’s exuberance on getting the LM into space reflects the sheer joy of seeing something that you have worked on so hard, and over so many years, to come to fruition. Kelly’s description of the tense minutes after the first manned lunar landing of Apollo 11 is exciting, as Grumman engineers sought to avoid an explosion from high pressure building in a fuel line. Those following the elation of the landing, indeed even the astronauts themselves, were unaware that only minutes remained before the rising temperature could have caused a tragedy.

Most likely readers will have some knowledge of the Apollo 13 flight, but the author’s perspective will provide new insights. Apollo 14 likewise presented Grumman with two significant problems that the engineers were able to program around—another mission saved.

Moon Lander was more than just an interesting read for the reviewer, who has read much of what has been published about the Apollo program over the past half-century (and who had the privilege of visiting Grumman in 1967 and putting his thumbprint on each of the LMs in the manufacturing area). It brought into focus the magnitude of the problem of “landing a man on the Moon and returning him safely to the Earth….”