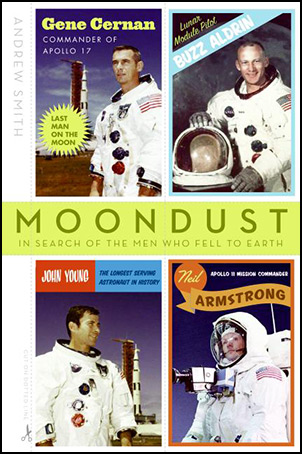 What is it like to stand on the Moon? The Apollo moonwalkers have tried to answer this question ad infinitum. But as journalist Andrew Smith discovers in Moondust: In Search of the Men Who Fell to Earth, there is a second, almost more intriguing question – what’s it like to live on Earth after that singular experience? “Where do you go after you’ve been to the Moon?” Smith asks this question and seeks the answer by tracking down the surviving Apollo astronauts. Through his swirling journey, amid the backdrop of the Columbia disaster and NASA’s renewed push to return to the Moon, Smith adds new data to the cannon of Apollo history while illustrating the astronauts’ complex post-Moon journeys.

Smith, a British writer born in the U.S., happened to meet Apollo 16 Astronaut Charlie Duke in the summer of 1999 on a magazine assignment. During the course of his interview, Duke learned Apollo 12 Commander Pete Conrad had died unexpectedly in a motorcycle accident. “Now there’s only nine of us,” he said. These words haunted Smith and propelled him to write Moondust. He endeavors throughout the book to chronicle their unique view of history and current perspective as the only humans on Earth who have visited an extraterrestrial body.

If you ever wanted to have a personal discussion with the moonwalkers, this is the book for you. Moondust is at its strongest when Smith’s thorough and probing interview technique is exercised on these men. It’s not just what they say, but how they live, how they react. How do they feel to be the only ones left? It’s widely known that many of the astronauts had troubled lives after they returned home. However, the book demonstrates that the divorces, alcoholism, and scandals are only part of the story. Why did they have trouble in the first place? How did they recover? Smith discerns that both the let down experienced after achieving such a spectacular feat – and the bizarre perspective they gained from seeing the Earth as a delicate marble in deep space – drive these men’s lives.

In his first encounters with Ed Mitchell and Dick Gordon, Smith is surprised by the older real-life versions of the space icons. He expects the strapping young astronauts he remembers, not the very human and somewhat anonymous individuals he sees now. When he meets Apollo 11 icon Buzz Aldrin at his home in Los Angeles, he’s confronted with a tan, smiling 72-year-old man, wearing a t-shirt and shorts. Buzz offers Smith coffee, and disappears in the kitchen for a while until Lois Aldrin appears and says, “He can go to the Moon, but he can’t make a cup of coffee.”

Such little details are endearing, but it’s the conversation that’s the most absorbing. Just a day after Buzz punched Moon hoax proponent Bart Sibrel in the face, Smith learns of Aldrin’s new passion for science fiction writing. Buzz, former Chairman of the NSS Board of Directors and current NSS Governor, also describes the organized cadre of space enthusiasts calling for a return to the Moon and beyond. The author further uncovers interesting details about the current astronaut “pecking order,” space hotels, Mars cyclers, and a seemingly ludicrous $33.31 NASA travel voucher for the trip from Texas to Florida, the Moon, and the Pacific Ocean.

Smith also interviews non-moonwalking astronauts, family members, and others involved to the grand Apollo project in Moondust. He weaves a great deal of NASA, Cold War, and 60’s cultural history into Moondust‘s narrative to provide a meaningful and engaging context for all these characters. The author’s use of the first person to describe his journey gets tedious sometimes when he takes long reminiscent trips to his childhood. But the device is also effective at times; with Smith as a proxy for the reader, just another human trying to make sense of the extraordinary moonshot from a personal perspective.

Overall, he comes to understand Apollo as a fortuitous crossroads in history when the Cold War met with hippie optimism of the future. The combination of those seemingly opposing motivations is demonstrated through the divergent post-Apollo paths of the moonwalkers. In general, commanders continued on an expected establishment path, while the lunar module pilots had varied and surprising lives after their journey. After their Apollo journeys, Ed Mitchell founded the “Institute of Noetic Sciences” to investigate his space-flight epiphany, Aldrin had a post-flight breakdown and wrote Return To Earth, Al Bean became an artist, and Charlie Duke and Jim Irwin found God.

Mitchell calls this the “command phenomenon.” As he explains, “One thing to note is that most of the guys who were vocal about the depth of the experience were Lunar Module pilots…The view of the guy who has to be alert and on top of things is different from the guy who’s just along for the ride – we had chores…but we could take it in and contemplate what we were doing more thoroughly.”

Smith is intrigued to find that the most striking experience for almost all the moonwalkers was simply the view of Earth from the Moon, or from their capsule as they returned home. The 24 Apollo astronauts who left Earth orbit experienced a cosmic perspective so unique that it still haunts them and continues to resonate in the human imagination to this day. Those astronauts are still just humans like us, trying to make sense of the Universe and their place in it.

Moondust is filled with amazing detail and many more captivating Apollo stories. In a way, Smith portrays Apollo as a big tease. The more distant we get from this time, the more fantastic it seems. I recommend this book to anyone who hopes to see humanity continue to push the envelope by exploring space. Moondust convinces us that if we do not add more moonwalkers to the remaining nine’s ranks, it would be a great loss for humankind.