Book Review: My Dream of Stars 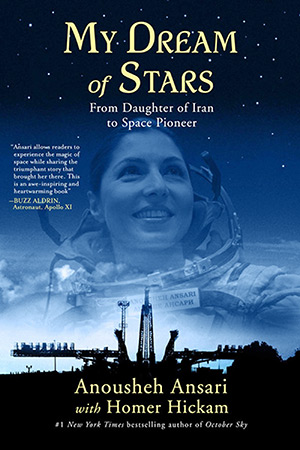 Where do people find the dream of flying in space? Some people have the dream, but most do not. Whatever its source, the dream knows no geographical boundaries, as Anousheh Ansari shows us in this autobiography. And she shows us further that for people with sufficient purpose and direction, the dream need not remain a fantasy.

Reading this story of the first woman to travel in space as a paying passenger, I found myself more than once thinking of the phrase popularized by Thomas Jefferson (it was a common idea of the Enlightenment era) that “There is a natural aristocracy among men — the grounds of this are virtue and talents.” This was the basic idea of the founders of the United States — that people should be allowed to rise or fall on the basis of their abilities and actions, not on the basis of ancestral inheritance. The founders wanted to create a place where this could occur, and Anousheh Ansari’s life story shows how well their success endures, even two centuries later. She believes in the limitless possibilities of her adopted country, and has taken full advantage of her talents to create value and be rewarded for it. Her biggest reward (so far) is the fulfillment of her childhood dream to go into space, with a ticket paid for out of her own pocket.

Ansari was born in Iran, a country she still loves, while maintaining a resolute silence on the subject of its current government (the reader may infer her opinion, but apparently she either sees no point, or no good, in political commentary). She came to America with her mother and sister in the aftermath of the Iranian revolution in the early 1980s. Her life from there has parallels with the life of that other Space Adventures customer who wrote a book about his experience. Like Gary Olsen (his book By Any Means Necessary! is also worth reading), Ansari has lived her life with an unfailing optimism and dedication to the work in front of her, and a conviction that obstacles are only temporary inconveniences on the path of forward progress. But the parallels go only so far, because Ansari and Olsen are different in the way they handle personal relationships. Olsen is divorced, and gives the impression of being something of a loner, whereas Ansari is not only very happily married, but very close to her husband’s family (also Iranian expatriates). In fact, one of the things that will strike a reader who grew up in a typical American home is how much closer Iranian families are to each other than the typical American family.

Read enough astronaut autobiographies and you might become jaded. You know that the book will begin with a prologue describing the space traveler’s launch, and the first chapter will flash back to the beginning of their life story. This book doesn’t manage to avoid the formula. But what you always hope for in one of these books is that it won’t be a bare descriptive exercise that leaves you with little sense of the author’s heart. In that regard, with the help of her skillful co-author, Ansari does not disappoint. In fact, she gives one of the most vivid and moving descriptions of the sheer joy that seeing the Earth from space kindles in the human heart that I’ve ever read: “Throwing off my belts, I was able to take a look through the tiny porthole of the capsule and saw Earth from space for the first time. My laughter stopped as tears welled in my eyes. I saw a small crystal float away from me. It was beautiful, a pretty little diamond. I wondered where it came from, if perhaps some worker had lost the stone from her ring. Then I realized it was one of my tears. It seemed to be attracted to the Earth. It touched the glass in the porthole and became for just a moment the tiniest of rainbows. I could not catch my breath…. I was entranced.”

The joy of the view was with her throughout her entire stay aboard the International Space Station. “The best part was at night when I could see the stars. They were simply unbelievable. It was as if someone had spread diamond dust over a black velvet blanket. When I was supposed to be sleeping I put my head to the window and stayed there until the coldness of the glass gave me a headache…. I had such a hard time sleeping because I kept forcing my eyes open to see the beauty and take it all in. Only a second longer, I would tell myself. Then I would tell myself the same thing again. And again.”

No one who shares Ansari’s dream of spaceflight, I think, will read her description of the experience with anything other than complete empathy and conviction that this is how we’ll react when our turn comes. I think most readers, too, will share my sense of outrage at the small minds who dare to set themselves in judgment of the life choice of a person much more accomplished than themselves, to spend twenty million dollars “selfishly” to make her personal dream come true, rather than donate the money to charity. The letters of criticism she received before her flight saddened her, but she has nothing to apologize for. Setting aside the number of people whose lives Ansari and her husband directly touched in the jobs their entrepreneurial ventures have created, her concern for the other people who share the world with her is more than amply demonstrated by where her money is directed. Among other things, she and her husband put up the money for the Ansari X-Prize, the prize won by Burt Rutan’s team when they sent the first non-government human spacecraft into suborbital space. And her charitable contributions to more conventional causes are much more extensive than that.

Anousheh Ansari shows us a life well lived — a life not to be envied, but emulated.